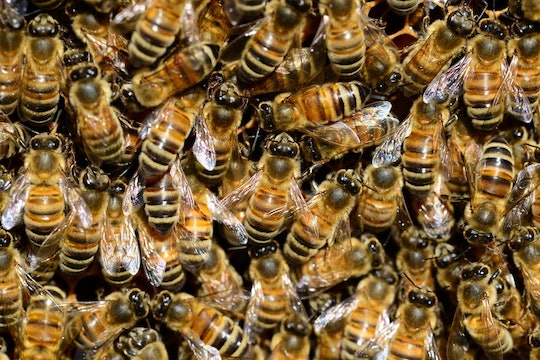 Mom Does Maternity Shoot With 20,000 Bees & The Internet Is Screaming

Part of the magic of maternity shoots is the way in which they embody a part of the mother's personality. Some may lean toward a boho theme, while others may opt for a boudoir style. But, this mom's maternity shoot with bees is unlike any other and has the internet literally buzzing. After you get over the initial shock of seeing thousands of bees covering this expectant mom's bump, her reason behind the shoot is actually quite charming and heartfelt as it combines her love of nature's miracle insect with her experiences loving and losing children.

Emily Mueller is an expectant mother of three who lives in South Akron, Ohio. As HuffPost reported, her newest addition to the family is due in November and she decided to celebrate the exciting time with a uniquely themed photoshoot. She — along with her husband, Ryan — owns and operates a bee-removal service, granting her an unlimited supply of pollinating props for maternity photos.

Her love for bees is only surpassed by her love for her children. She told Cleveland.com that the symbolism behind her photos pays homage to both. "Bees represent life and death," she told the local news outlet. "We’ve had three miscarriages, so these pictures are dedicated to life and death, to all of the children we’ve had."

The honey-sweet photos were taken by Kendrah Damis, a professional photographer and old friend of the family, according to HuffPost. In order to control the bees, Mueller placed the hive's queen in a small cage, causing the other bees to remain close by. While Mueller looks completely serene in the photos, Damis told HuffPost that she was a bit nervous during the shoot.

"It was uneasy, but I wasn’t that scared," the photographer explained to HuffPost. "I did have to flick a bee off my hand, and I unconsciously hunched down when they were flying around."

Due to the unique nature of the shoot, Mueller has acknowledged that some people may be concerned or confused after seeing video and stills of the experience. The mom-to-be told Inside Edition:

I know a lot of people are looking at this video, thinking, "This lady is crazy." And I understand completely. Many years ago, I was afraid of bees, too.

Despite her calm demeanor and expertise with the bees, Mueller told Inside Edition that she didn't walk away completely unscathed. She was stung three times throughout the photoshoot, including crushing one with her arm. She explained, "None of the bees intentionally stung me. It was my own fault. I didn’t realize there was one on my arm."

But to be fair, she was spending an afternoon with 20,000 bees — a sting or two is to be expected. Even if there was minimal risk for her, Mueller told People that the baby was never in any danger. In fact, she hopes that her shoot changes some of the negative attitudes toward bees:

People think I’m putting my baby at harm. But bees are gentle, and I hope my bee belly helps people see that they aren’t as scary as you might think.

Overall, Mueller was very pleased with her experience. She told HuffPost that is was a spiritual experience for her. "It was absolutely amazing to connect with nature in that way and to have the bees directly on my womb was so spiritual," she told the website.

Hopefully, with this maternity shoot's viral status, people will realize the role buzzing bees play in our eco-system. And, perhaps, more creative and daring photo shoots will grace our social media feeds as well.

(To see the full photoshoot, head over to Kendreah Damis Photography.)