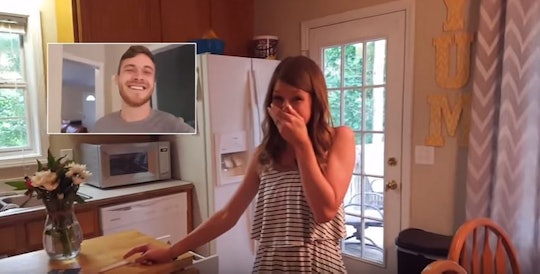 Tim and Rachel Brummel are a cute young family who live in Canton, Georgia, with three kids: Jackson, 4, Sawyer, 3, and Wyatt, 1. After three kids, they were done in the baby making department. They were thinking about adopting a fourth. So Tim went down and got a vasectomy in December. Somehow, something went wrong, because the Brummels have baby No. 4 on the way. You have to check out this mother-of-three's reaction to finding out she's pregnant after her husband got a vasectomy. It's surprisingly sweet.

Tim went down to the clinic and got his vasectomy in December. Then he had to go back in for a follow-up appointment to make sure the procedure took. He never heard back on the test results, so Tim just assumed he was good to go.

Weeks later he said he noticed his wife acting suspiciously like she might be pregnant. "I never got my results back, so I figured no news was good news," Tim told People. "But when Rachel began showing signs of pregnancy in July, I called the clinic who said that one side [of the vas deferens (or ductus deferens)] was unsuccessfully clipped."

So Tim decided he would confirm the pregnancy himself before letting Rachel in on the news, which is where some ladies like me might lose their sense of humor. Tim turned off the water to the toilet overnight so that when Rachel got up and peed in the morning, he could test it for pregnancy. He did, and she was.

So he decided to surprise her with the news, and Rachel, to her credit, is totally sweet and chill about the whole thing. Take a look at Tim's big reveal.

"She was so, so excited," Tim said, according to People. "This baby was meant to be in this world!"

I have to applaud Rachel's healthy attitude about the whole thing. But I'm also a little uneasy about how little control Rachel was given over the situation. I mean, it was a cute idea and all for a baby reveal, but think about Rachel. While Tim's idea is dramatic and attention grabbing, I can't help but wonder if there's more going on here than meets the eye.

Like, why is Tim so chill about the vasectomy being messed up? I mean sure, the baby is on the way and there's no use being upset about it, but still. You'd think he'd be a little annoyed. It's also kind of weird that according to the Toronto Vasectomy Clinics vasectomies have a more than 99 percent success rate. And according to The Turek Clinic's website, and Dr. Turek, who bills himself as an expert in the vasectomies, says there are three primary reasons for a vasectomy to fail: having sex too early following the procedure, the tubes essentially grow back and reconnect after being snipped, or, finally, what he calls an "inexperienced surgeon" who either snips the wrong tube or doesn't block it all the way.

So if Tim did get a vasectomy and it didn't take, there might have been legit doctor error worth exploring to prevent other patients from having the same bum result. Other patients who might not think an accidental pregnancy is all that cute.

For Rachel's part, she did seem genuinely happy about the news. Either way, the Brummel brood is about to get a new member. Congrats to all. And hang in there, Rachel! The new baby is due in March, according to People.

"And we just couldn't be happier," Tim said. "It's funny how life works out like that sometimes. "