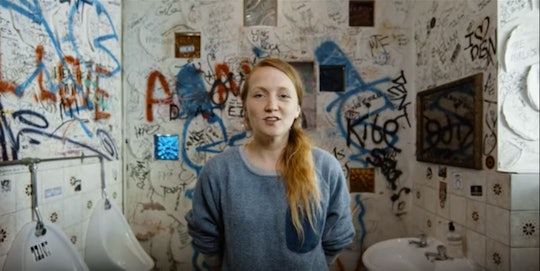 When British mom Holly McNish found herself totally fed up with the criticism and judgment she and her mom friends were facing when trying to breastfeed their children in public, she addressed it in the best way she knew how: spoken-word poetry. This mom's viral breastfeeding poem called out breastfeeding shaming and the insane double standards that exist about breasts in general (namely, that they've been totally normalized as sex objects, but are still taboo for feeding infants). And unsurprisingly, according to People, it's been resonating with mothers in a big way. The video, "Embarrassed," has received more than eight million views on Facebook alone, and after watching it, the idea that mothers should be expected to breastfeed their children in toilet stalls will make even less sense (because, seriously, who wants to feed their kid in a toilet stall?!).

At first, McNish acknowledged that the thought of a breastfeeding mother's exposed breast could make other people uncomfortable — which is why the assumption that women should cover up or not breastfeed in public didn't strike her as particularly offensive at first. But the more time she spent in dirty bathrooms feeding her daughter, the more she realized that she lived in a "country of billboards covered in t*ts," where pornographic magazines could be left out on the top shelves in stores for men to buy, yet it is mothers who are being told they are indecent by not hiding themselves away to use their breasts for their actual intended purpose.

McNish explains she's "not trying to parade this, [or] make a show," but that the backlash women face over breastfeeding is real, and hugely unfair,

When I'm told I'd be better just staying at home, and when another friend I know is thrown off a bus, and another mother told to get out of a pub, even my grandma said 'maybe I was sexing it up.'

But even if you prefer to breastfeed in private, or if you've chosen to bottle feed, or even if you've never had anyone criticize you for breastfeeding before the way that McNish has, the issue should still matter to you. Western breastfeeding shaming is symptomatic of an even larger problem: the fact that the stigma over breastfeeding has led to higher infant mortality rates in developing countries, because women are choosing not to give their children breastmilk when it could literally save their lives.

According to UNICEF, as many as one in two newborns worldwide are not given breastmilk within the first hour of birth, "depriving them of the essential nutrients, antibodies and skin-to-skin contact with their mother that protect them from disease and death." And that is especially concerning, given that studies have shown that the longer breastfeeding is delayed (or when it is avoided all together), the risk of infant death in the child's first month of life increases. According to UNICEF Senior Nutrition Adviser France Bégin, “if all babies are fed nothing but breastmilk from the moment they are born until they are six months old, over 800,000 lives would be saved every year.”

And yet, as McNish explained, "in towns where breasts are oases of life," women are expected to be "enticed by labels, and gold standard rights, claiming that breast milk is healthier, powdered and white." It's one thing to need formula for your child, or to prefer it as a personal choice for whatever reason when you live in a country where you know it's safe. But for far too many women, forgoing breastfeeding for formula can put their children's lives in jeopardy:

Nothing is free in this money-fueled life, which is fine if you need it or prefer to use bottles. Where water is clean and bacteria boiled. But in towns where they drown in pollution and sewage, bottled kids die and they know that they do it. In towns where pennies are savored like sweets, we’re now paying for one thing that’s always been free.

As a result, McNish vowed in her poem never again to sit on "cold toilet lids" to appease others' discomfort over public breastfeeding, and that is a decision that could have a big effect for women everywhere. After all, the more public breastfeeding is normalized — and the more women are willing to stand up to the unfair and ridiculous criticism that they shouldn't be feeding their children in public — the less it will be acceptable to expect women to cover up, or to stop feeding their children breastmilk entirely. And not only will that make life easier for moms in general, ultimately, it will help save lives, too.

More Like This
Mom's TikTok Sparks Debate On Whether It's "Normal" For Babysitters To Sleep On The Job
Viral TikTok Breaks Down How Beautifully Bluey Depicts One Character’s Infertility
Keep Talking To Your Kids About Abortion — It's More Important Than Ever
This Map Illustrates Just How Many States Would Ban Abortion If Roe V. Wade Is Overturned