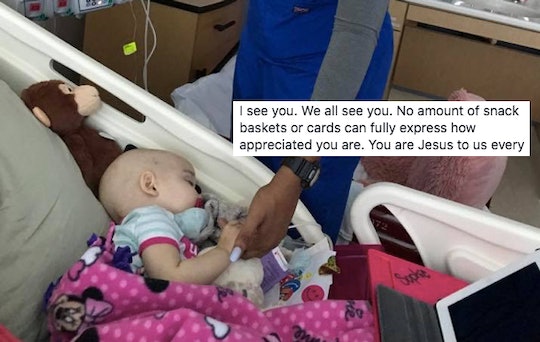 It's just about the worst thing a mother can imagine; their child becoming gravely ill. For Shelby Skiles, the world tilted on its axis the day her daughter Sophie was diagnosed with cancer. Ever since doctors discovered a large mass in Sophie's chest and diagnosed her with T-cell lymphoma, Skiles' world has been revolving around hospitals. So, she has certainly seen some things. And this mom's viral letter to pediatric nurses reads as a powerful reminder of all the incredible, emotional, difficult work these people do behind the scenes, on a daily basis. A reminder of all the reasons they need to be celebrated over and over again.

Skiles has been in and out of Children's Medical Center in Dallas, Texas ever since her 2-year-old daughter was diagnosed with leukemia in May. She initially noticed her daughter's persistent cough in March, as she told Babble:

It just wouldn’t go away. But I wasn’t quick to take her to the doctor for little things so I assumed it was the allergies that she and I both have. We rode it out until it started sounding ‘gross’, and then took her to Urgent care.

After she was tested for allergies, Sophie was misdiagnosed with asthma. On May 18, she completely stopped breathing, Stiles told Babble.

And that's when they began their many weeks of being "in and out" of hospitals, trying to combat the cancer with aggressive chemotherapy treatments, according to Babble.

After spending 142 consecutive days in either a hospital or a rehabilitation center, Skiles had found immeasurable comfort and kindness in the pediatric nurses who have been with her and her child around the clock.

She penned a letter to those nurses, who "try so hard to be unnoticed by me and my child," as she wrote in a now-viral post for her Facebook page, Sophie the Brave. The letter continued:

I see your face drop a little when she sees you and cries. You try so many ways to ease her fears and win her over. I see you hesitate to stick her or pull bandaids off. You say 'No owies' and 'I'm sorry' more times in one day than most people say 'thank you'.

I see all of those rubber bracelets on your arms and wrapped around your stethoscope, each one for a child that you've cared for and loved. I see you carrying arm loads of medicine and supplies into one child's room all while your phone is ringing in your pocket from the room of another... I see you stroke her little bald head and tuck her covers around her tightly. I see you holding the crying mom that got bad news. I see you trying to chart on the computer while holding the baby whose mom can't-or won't be at the hospital with her.

When you consider the traumatic life events pediatric nurses must go through every day as they care for sick children (the fear, the tears, the terrified parents), it's wonderful to see someone openly acknowledging their work. Even as she tries to come to terms with her daughter's illness.

Skiles went on to note that she understood each of these nurses have their own concerns in their own homes, but always manage to put those concerns aside for their patients.

"You put aside what's happening in your life for 12 hours straight to care for very sick and something's dying children," Skiles wrote in the viral letter. "You go into each room with a smile no matter what's happening in there. You see Sophie's name on the schedule and come to check on us even when she isn't your patient."

No wonder so many people have been applauding Skiles for her letter. Her post has been shared more than 25,000 times, and the comments have been pouring in with love and respect for nurses.

"This is so beautiful. I couldn't agree more. Thank God I've never had a sick child, but I work in a children's hospital and cannot say enough about our staff," one person commented.

Happily, little Sophie was pronounced cancer-free on Oct. 4 and is now waiting for a bone marrow transplant, according to Babble. And the Skiles family was able to withstand it all, thanks largely to the support of the pediatric nurses.