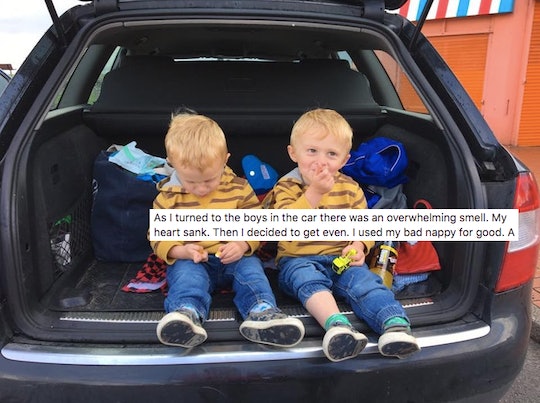 Everyone loves a prime parking spot. Close to your destination's doors, not having to hike a mile to get there... it's the epitome of convenience on a busy day. As nice as it is to find open spots like these, not all open spots are up for grabs — particularly those labeled "expectant mothers" and "families with small children." Well, this mom's viral post about a guy stealing her parking spot shows just how thick of a line in the sand you cross when you move in on these spots without just cause. The moral of this story: park where you should park and don't mess with a mama who has an endless supply of dirty diapers.

Mom and blogger Alexandra Gerrard of the popular page Make Mine a Double was just trying to stop by her local Tesco store in Oxfordshire, England with her twins, Osian and Rhydian, when her day took a dramatic turn.

"When I got back to my car, an oversized, too-old-to-be-a-boy racer pulled into the PARENT AND BABY space next to me as if it was a F1 pit stop," Gerrard began the now-viral Facebook post. "The breakneck speed made me sh*t my pants a little. I thought maybe they were giving everything away for free in Tesco to warrant the urgency."

Rather than immediately take offense and react, Gerrard wrote that she tried to remain calm and give the man the benefit of the doubt. Perhaps he didn't realize that he was in a spot designated for pregnant women or families traveling with small children.

But when she smiled her "sweetest smile" and alerted him to the error of his ways, the guy responded, "So?"

"'Just it's really tricky to get a space, sort a baby out, let alone two and get a DOUBLE trolley, especially when it's about to rain.' I pointed at the sky," Gerrard wrote of her response.

"'Not my problem, love,'" the man said back to her, who Gerrard has dubbed "the bearded Hobbit."

"Maybe you could move to another space as there's no more parent spaces left?" she said back to him. But, this is when the guy goes so far as to tell her to "f*ck off" and called her a "fat b*tch," as Gerrard detailed.

She paused before responding, but she explained in detail what she would have liked to say, outlining the rigorous diet that she has been on and the utter lack of politeness that she was left with after dealing with two babies while essentially running on nothing but lettuce. But rather than say what was on her mind, this mama remained calm and told him that she hopes he becomes a father one day and has someone screw him over in the very same way.

From there, the guy went on to tell her to once again to "f*ck off" and to "go burn her bra somewhere," then sauntered off with his middle finger held high, Gerrard wrote.

As if she needed to be reminded that she had twin littles to contend with, Gerrard was met with the smell of a seriously stinky diaper when she turned back to her car. Instead of surrender to her fate, Gerrard decided to turn poop into poop-ade:

My heart sank. Then I decided to get even. I used my bad nappy for good. A little justice for all knackered parents who have been f*cked over with similar tw*tty McTw*t faces abusing these parking spaces and have had similar experiences.

Yep, you guessed it. She put her kid's stinky, dirty diaper on this guy's windshield, holding it in place with a windshield wiper. In her post, Gerrard wrote:

I felt instantly better! I'm just sorry I didn't have the time to hang round to see his reaction. I did receive affirmation from another woman who must have witnessed the incident. "That's genius" as she walked off with a smile.

It seems the bystander wasn't the only one to affirm Gerrard's stink bomb. Her post has already garnered almost 30,000 likes and has been shared almost 4,000 times. Gerrard told Romper that she knew her readers would relate to the post, but didn't expect such a large reaction:

This happened on Sunday and thought it might be a bit of a giggle for my followers to read. I know it certainly annoys me and lots of my other parent friends. It’s something we’ve all been annoyed about at some point. I thought lots of people could relate although maybe not carry out my bad actions!

While I'm no advocate for plastering diapers on the windows of your enemies, to park in an expectant mother or family spot when you don't even have a kid with you is just wrong. I think even Mother Theresa would be hard pressed to make a case for the guy who stole her spot. As so, revenge is a dish best served... dirty?