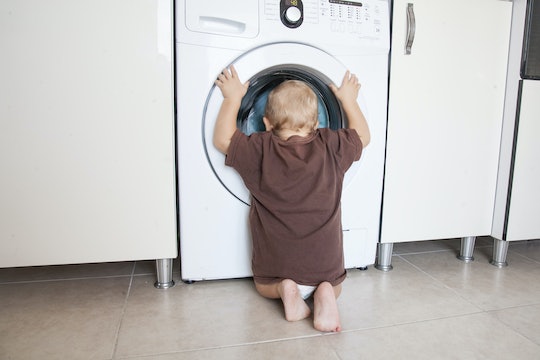 Most parents are well-versed in the art of baby-proofing their homes, and there are plenty of articles on the important subject. But just when you think you know all there is to know about keeping your child safe in your house, a new and unexpected danger crops up. And if you prioritize staying up-to-date on child safety at home, there's a good chance you'll appreciate this mom's viral warning about front-loading washing machines. Although the post is a frightening read, no parent should miss this important message.

Lindsey McIver took to Facebook on Wednesday to share a harrowing account of a near-fatal accident that occurred at her home recently. The terrifying incident occurred shortly after McIver replaced her broken top-load washing machine with a "new and cool" front-load washing machine, as she shared on Facebook.

Of course, McIver and her husband went out of their way to warn their young children not to touch the new washer. "We spent that evening installing it with the kids underfoot. We told them several times that they were not to touch it. They all replied 'OK,'" McIver recalled, according to her Facebook post, which has garnered more than 79,000 reactions and 162,000 shares since she posted it last week.

As many parents already know, however, kids rarely listen when they're told not to "touch" something — especially when it involves a shiny new object. Sadly, McIver was reminded of this phenomenon the hard way when her 4-year-old son frantically woke her up early Tuesday morning. McIver wrote:

Early Tuesday morning we were woken up by our four-year-old son who was crying so hard he could barely talk. As I was trying to understand what he was saying, my husband flew out of bed and down the stairs. It was then that the realization hit. He had said: Kloe. Inside. Washer.

The frightening moment quickly intensified when McIver discovered 3-year-old Kloe locked inside the washer. "By the time we reached the laundry room in the basement, my three-year-old daughter Kloe was LOCKED inside the airtight washing machine," McIver described in the now viral Facebook post. "It was tumbling and filling with water. She was screaming but you couldn’t hear her."

Luckily, McIver and her husband were able to get Kloe out of the washer ASAP, and the little girl walked away with just a "few small bumps on her head." Phew.

Although McIver was "hesitant" to share her experience due to potential mom-shaming, she ultimately decided to open up about it in order to help inform other parents out there about this danger. McIver explained:

We are continually surprised at the new, inventive ways our kids come up with to try and die. And this was definitely a new one. I took this picture after we secured the door shut with a child safety lock. We also found a child lock feature on the settings that, as long as it is engaged, will not allow the washing machine to start. But it does not lock the door. We hadn’t even used the machine yet so we hadn’t looked at any of the settings. Also, it obviously took two curious kids to pull this off. I want to encourage anybody who has this type of front loading washing machine and small children, or even grandkids who visit, to lock the door with a child safety lock and always keep the child lock setting on!

All excellent points. McIver perfectly summed up how easy it is for this type of accident to happen, while also pointing out how simple it is to prevent.

But the most important piece of McIver's message is her argument about mom-shaming.

I realize that there are ways we could’ve prevented this from happening. This is the season for swimming pool accidents and kids being left in hot cars and all sorts of other horrible accidents. And that’s what most of them are. Accidents. Shaming the mom doesn’t do anyone any good. We need to be open and honest about our mistakes to help one another keep our kids safe. And trust me, that mom is already beating herself up enough.

Well said, right? It's essential parents share their oversights and mistakes with other parents because it could possibly save lives. There's nothing shameful about admitting to a mistake — in fact, it's pretty brave. Bravo to McIver for speaking out.

Washing machine accidents are more common than you might think — over 2,000 kids a year are seriously injured by washers, according to Consumer Reports. To ensure your family doesn't experience a similar situation like McIver's, double-check that your washer's child lock is in place because this simple step could potentially prevent a tragedy.