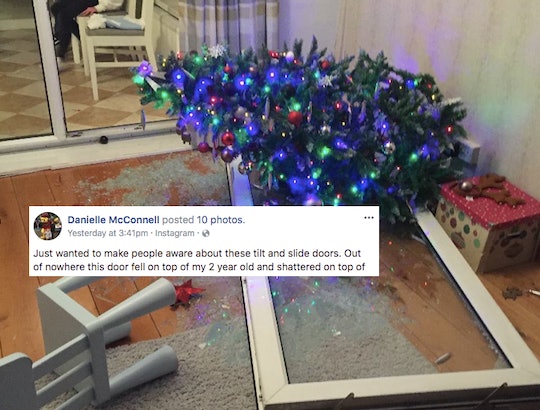 It's one of the scariest things about having little ones around the house; the constant worry about surprising household dangers. Most parents try to stay abreast of the more obvious concerns for their child's safety, of course, but some areas of your house might be more dangerous than you think. Something one mom unfortunately found out the hard way. In a recent Facebook post, Danielle McConnell is warning parents about sliding glass doors after one nearly crushed her toddler.

McConnell's post was written specifically about a particular kind of tilt and slide door. The door apparently fell "out of nowhere" and landed on her 2-year-old son, nearly crushing him to death, as she wrote in a post that should be considered something of a public service announcement:

Just wanted to make people aware about these tilt and slide doors. Out of nowhere this door fell on top of my 2 year old and shattered on top of him. Researching today I found that this exact door fell on top of a toddler a few years back and killed her. My son was so lucky to walk away from this with cuts and bruises. Someone else’s child may not be so lucky! If anyone has or knows someone who has these type of doors please be aware as they can snap at the top and fall out. I’m so grateful my baby is ok!

The pictures McConnell shared of her son and the smashed door are shocking; the little boy's face was swollen and covered with cuts and bruises. While the door laid on the floor beside a broken Christmas tree, the window smashed in. It looked like the scene of a crime. And very well could have been the scene of a much worse tragedy than a frightened and banged up little boy.

The sliding glass doors found in so many homes are rarely considered an area that might require baby-proofing, but apparently they should be. McConnell noted in her Facebook post that a toddler had reportedly been killed two years ago by a sliding door, and she's right; there have been a few tragic instances.

In 2009, The Telegraph reported that 2-year-old Ruby Jones of Great Britain died when a sliding glass door came loose from its hinges and fell on top of her, crushing her. This door was also a tilt and slide door. In 2008, a 14-month-old girl was also crushed by a similar door that had tilt and slide construction. In that case, a coroner noted that the door in question was an "accident waiting to happen." The Telegraph reported that they also noted the design of the door itself was faulty:

The top of the door is subjected to pressure that it is not designed for. Over time, the flexibility of the blocks hardens and will crack causing the door to fail.

McConnell admitted in her Facebook post that her son's encounter with the tilt and slide door could have been considerably worse, but that doesn't mean it wasn't a harrowing experience. And people are paying attention; her post has been shared more than 38,000 times, and many of the comments had people tagged in them as a cautionary tale.

As Facebook user noted, "I shared this to my page. Thank god this baby is ok. Omg. So scary. They should be recalled they are dangerous."

While McConnell did not share the actual brand of door in her post (Romper has reached out to her for further information and is awaiting a response), it's probably a good idea to check the security of your own tilt and slide door. Because nobody wants to find out their sliding glass door is an actual safety hazard after the fact.