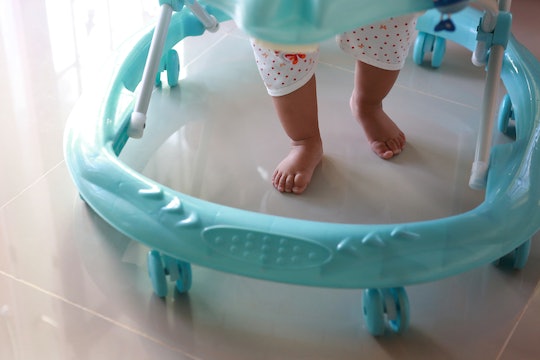 Baby walkers allow little ones who are just getting up on their feet to get a little mobility. Toddlers-in-training love them, and they seem to be pretty convenient, so what could possibly be the problem with them? Well, these suckers have also been found to be seriously dangerous — so much so that this New Jersey lawmaker wants to ban baby walkers outright in the Garden State, and the reasons she gave are scary.

According to New York's News12 TV station, New Jersey state senator Linda Greenstein is sponsoring a bill to ban the wheeled devices due to the high percentage of children's injuries that occur each year when kids are allowed to scoot off in these so-called "toys" on wheels.

"I believe and apparently doctors believe that these are inherently dangerous objects," Sen. Greenstein, a Democrat, told the news station. “Even if you take your eyes off a baby, an infant, for a couple of seconds there can be an accident.”

If the bill continues through the state legislature and Greenstein gets other lawmakers on board (so far, she is the only sponsor of the initiative, News12 noted), New Jersey would be the first state to ban the walkers outright, website NJ Spotlight reported.

As parenting website Baby Gaga noted, however, despite increased safety tweaks made to newer versions in recent years, the mere fact that little ones can roll away unsupervised — and then crash down stairs, hit a wall or any other number of bad options — makes baby walkers intrinsically a potential danger.

In fact, the website notes that Canada has already banned this device. Baby Gaga also noted that Greenstein's proposal would fine anyone who sells a baby walker up to $10,000. Additionally, police would confiscate walkers up for sale.

"While some people might look at a very cute, very brightly-colored baby walker and say, 'This couldn't be dangerous. This is a baby toy,'" Greenstein noted to News12, "it really is used by some parents as a form of babysitting. And that's the problem."

In fact, the American Academy of Pediatrics has advocated for them to be banned in the United States altogether, due to the extensive history of injuries, the group's website recently noted.

The AAP has counted hundreds of thousands of injuries over the last 25 years, News 12 noted reported, with NBC adding that 2,000 children go to the ER as a result of walker accidents.

In a 2001 paper, the AAP suggested parents stick to stationary activity centers as a rule (something that my pediatrician specifically requested when my kids were little).

New Jersey radio station 101.5 noted that a study from the AAP correlates a drop in walker-related injuries with fewer of the devices being in use, as well as increased safety standards for those still being manufactured.

Of course, not everyone agrees with Greenstein's assessment to News12 that it is the job of government to protect the most vulnerable. "The libertarian in me can’t possibly vote for what I consider to be a preemption of parental discretion and responsibility," state Sen. Declan O’Scanlon reportedly said in opposing the bill, as per 101.5 FM.

I don't know about that.

I get that people should be able to make choices. And I also get that babies in walkers are just plain cute, and it's hard to resist watching a little one thrill at his or her first taste of independence. But clearly, this invention comes with a potential risk to those little ones in the walkers. Ultimately, no one wants babies getting hurt.