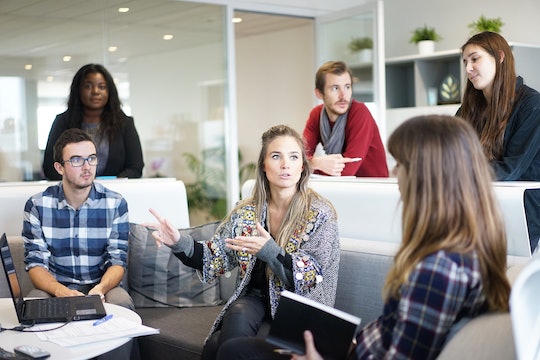 Spoiler: Being A Woman In The Workplace Still Sucks In 2017

On Tuesday, McKinsey and LeanIn.org released their joint annual "Women in the Workplace" report, an in-depth look at the state of women's work life in the United States. And while women's rights have been progressing around the world — and awareness of certain issues, such as the gender wage gap, has definitely increased — this new report about being a woman in the workplace is just downright depressing. Get ready to tweet out some disappointing facts and schedule a meeting with your boss, because by the time you've gotten through some of the report's most surprising findings, you're going to want to share them with the world (and, um, maybe ask for a promotion).

The hope, of course, is that learning the facts will help us move forward, according to Sheryl Sandberg, who sits on LeanIn.org's board of directors. To get to the information included in this year's report, LeanIn.org and McKinsey collected data from 222 companies (employing more than 12 million people in total) and surveyed more than 70,000 employees.

"This year’s report shows that progress toward equality in the workplace continues to be slow — and may even be stalling," Sandberg wrote in a Wall Street Journal op-ed the day the 2017 report was released. "It’s hard to solve a problem we don’t fully see or understand — and when it comes to gender in the workplace, too often we miss the scope and scale of the issue."

So here are just a few facts we'll need to confront head-on if we want to see better gender parity in workplaces across the United States:

Women Are Underrepresented At Every Stage Of The Game

The majority of college and university graduates these days are women — a full 57 percent of them — but you wouldn't know it from looking at most corporations' hiring pipelines. Women take up 47 percent of entry-level positions, and the numbers only drop from there. In fact, women only make up:

Even in industries where more women take up more entry-level positions — such as in health care (73 percent women) and consumer packaged goods (59 percent) — they mysteriously disappear from executive ranks. The fact that the number of female employees drops from 59 percent of entry-level roles to only 23 percent of executive positions in the consumer packaged goods industry just might have something to do with the fact that women are 18 percent less likely to be promoted than men are.

No, This Isn't Happening Because Women Are Leaving Careers To Become Moms

Many people assume that women disappear from top roles in companies because they're spending less time in their careers — to go off and start families — and thus not ascending the career ladder. But the truth of the matter is, when compared to male employees of the same ethnicity, women are leaving their companies at the same rate as men (and both genders are usually leaving to find work elsewhere). Only 2 percent of women say they plan to leave work to focus on family. One percent of men say the same.

Every woman in the workplace has heard that she's simply not as good at negotiating salary rates or asking for promotions as the average male employee is. (Past research has shown that women have good reason to be wary, as well, with women paying a higher social cost than men do when they negotiate their salaries.)

However, the Women in the Workplace 2017 report found that women's reluctance to ask for promotions or higher wages isn't what's holding them back. In fact, women are asking for promotions at comparable rates to men, and senior-level women actually ask for more promotions than senior-level men do.

You Guessed It: Women Of Color Have It Worse

Unfortunately, women of color are still getting the shortest end of the stick at work. Women of color, especially black women, receive less support from their managers and climb the career ladder more slowly. Their rate of attrition is higher (15.4 percent of white women leave work, while 18.2 percent of black women do the same) and and their rate of promotion is lower (with black women getting promotions at a rate of just 4.9 percent compared to white women's 7.4 percent).

Nearly half of the men surveyed by the 2017 report thought women were well represented in their company's executive team – despite the fact that those men belonged to organizations where only 10 percent of senior leaders were female. Whereas only one-third of female employees thought they were well represented in executive levels at their companies.

We've clearly got a long way to go, and the first step towards moving forward is acknowledging where we're at now. So make sure to share the information widely, and then start taking steps ASAP to join — and grow — the group of women sitting at the top.