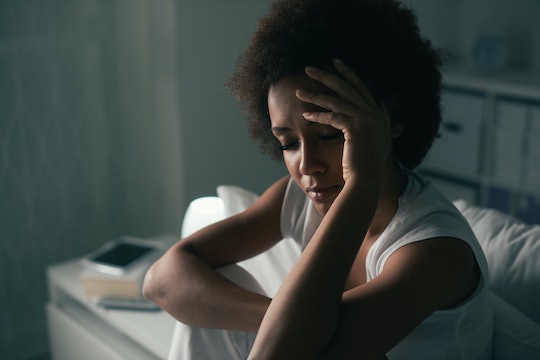 This New Stat About Sexual Assault Is So Important After #MeToo

Last year, the #MeToo movement and public takedown of several high-profile men in Hollywood and Washington helped highlight the prevalence of sexual assault and misconduct in the United States. Now, a new statistic about sexual assault has helped shed light on exactly why so many women stay silent after being attacked — and helps highlight how we can change the conversation to help more women.

The new stats come from the 2016 National Crime Victimization Survey, an annual, nationally representative survey of 135,000 households carried out by the Bureau of Justice Statistics. Based on survey results, the bureau estimated that at least 320,000 incidents of sexual assault and rape took place in the United States in 2016. But what really stands out among the stats surrounding those incidents is who the perpetrators were.

Far too many people still grow up believing that sexual assault is something perpetrated by a shady stranger lurking in an empty parking lot after midnight — and that misconception means many victims of assault don't even know they've been abused. Others who do realize they've been assaulted need to grapple with the very real repercussions that reporting the assault could have on their relationships, their professional lives, their finances, or their families.

When an assault or rape is perpetrated by an intimate partner or acquaintance, victims are more likely to blame themselves, minimize the harm caused by the incident, or make excuses for their offenders, according to Psychology Today. As one survivor wrote for Elite Daily last year,

I didn't believe what had happened. I couldn't believe it. Rape doesn't happen in the same bed you shared a dozen times with a man you care about. Rape does not turn someone you trust into a monster. Rapists don't give you back rubs after. Their eyes don't fill with tears as they tell you they're sorry.

And not only are victims less likely to recognize assault for what it is when it's perpetrated by someone close to them, but so are others: one study in 2008 found that, when told a fictional story depicting a man raping a woman, students were less likely to label the incident as sexual assault when the offender was the woman's husband (rather than her neighbor).

The fact that other people are less likely to see a woman's assault as rape when it's perpetrated by someone close to her — even if she herself is clear on what happened and she feels safe in reporting the incident — also helps contribute to the number of incidents that go unreported. Because to talk to others about an assault often means to be asked "What were you wearing?" or "Were you drinking?" or "Did you lead him on?" And only very rarely does it lead to tangible outcomes: of every 1000 incidents of rape, only six offenders are incarcerated, according to the Rape, Abuse & Incest National Network.

If we want to change the statistics out there, we need to start by educating people honestly and accurately about sexual assault. They need comprehensive sex education that gives them information about abuse and consent, and they need to know that it's far more likely for them to be assaulted by a partner or a friend than by a stranger. We need to get better at supporting victims of assault and believing them — and then we need reason to believe that incidents will be taken seriously and have real repercussions for perpetrators.