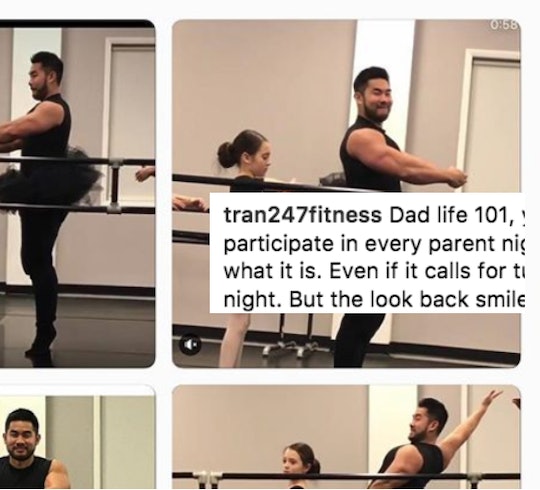 There are plenty of gendered stereotypes about ballet, and about the roles of mothers versus fathers when it comes to parental involvement. But in one Instagram post, a father blew all those rigid expectations to pieces. This photo of a dad and daughter dancing ballet together will melt you. It is a total delight.

This week, Tennessee father Tranh Tran posted a photo on his Instagram showing him and his 8-year-old daughter, Adriana Cross, at the parent night for her ballet school, standing at the barre for a demonstration. Parents are asked to participate once a year. Adriana's mother would normally be the one to get up there with her daughter, but because she is seven months pregnant, Adriana asked her father to step up instead, according to what Tran told Global News.

And he stepped up hard. Tran went all out, donning a black leotard and a tutu, and doing what seem to be some pretty amazing dance moves. In the caption, he wrote:

Dad life 101, you participate in every parent night no matter what it is. Even if it calls for tutu for ballet night. But the look back smile from her made it all worth it. Not gonna lie, my calves and toes were cramping up

Honestly, I'm no ballet expert, but it seems like Tran has pretty great form for a newbie. Maybe he should audition for his local production of The Nutcracker.

The photo is a lovely, heartwarming testament to fatherly love, and to the funny, unexpected things that parents will do in order to make their children happy. Tran told Romper via email,

My daughter asked me to wear the tutu because she thought it would be funny so I agreed... She smiled the entire class and most of the other parents and kids had a good laugh at my expense.

And from what he told Global News, the cramping calves and toes were entirely worth it, in order to support Adriana:

She takes ballet very seriously, so it was nice to see her laughing throughout the class. I love my daughter and I would do anything to keep her smiling. I wouldn’t have missed it for the world.

Kudos to Tran for being willing to power through a bit of embarrassment in order to make his daughter's day. Apparently, he was one of only two fathers to participate in the parent night ballet demonstration, and the only one to put on a tutu. The comments on his post are filled with positive notes about what an inspiration he is.

On that note, let's take a moment, in the midst of loving this adorable story, to remember that moms do this kind of stuff all the damn time for little or no acknowledgement. It's great to see Tran affirming that the "Dad life" includes going to every parent night, because certainly not every father feels that way. The stereotype of the father who takes the kids to the zoo on the weekend while the mother puts in most of the day-to-day work of child care is a prevalent one, and for good reason.

But things seem to be changing now, thank goodness. Pew Research Center found that dads are increasingly becoming more involved in their children's lives. The amount of time fathers reported spending on child care in 2015 was triple the amount that fathers reported back in 1965, even as roughly half of surveyed fathers felt that they still weren't spending enough time with their children.

But hey, that can always change. Maybe dads everywhere who wish that they were more involved just need to pull on a tutu once in a while, and bust some moves like Tran. It's certain to make their children happy. And if this particular, viral case is any example, it's certain to make the internet very happy too.