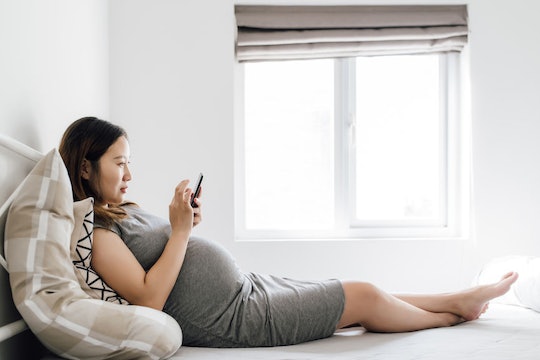 Your first OB/GYN visit after a positive pregnancy test is just one of countless more to come. But now, according to a recent study, a mobile prenatal care app is replacing in-person visits to the doctor for more and more moms-to-be.

The George Washington University study, published in the journal JMIR mHealth and uHealth, included two groups with a total of 88 participants and found that Babyscripts, the leading virtual care app for managing obstetrics, reduced in-person prenatal care visits while maintaining patient satisfaction. Participants in the study, according to the published paper, were pregnant women between 18 and 40 with low-risk pregnancies. Low-risk pregnancies are defined as a single pregnancy with no patient history of hypertension, diabetes, renal disease, collagen vascular disease, maternal substance abuse, or other previously documented condition that could negatively affect the outcome of a pregnancy.

“The positive results of this study are a huge validation of our belief in the power of technology to support mothers and providers without compromising quality,” Anish Sebastian, CEO and co-founder of Babyscripts, said in a press release. “This research shows that mobile health has the potential to deliver precision care to mothers while allowing providers to allocate time to the most vulnerable of their patients, and ultimately save lives."

Dr. Kathryn Marko, lead author of the study and an assistant professor of obstetrics and gynecology at the George Washington School of Medicine and Health Services, said that the new technology could make one of the most widely-used preventative health care services more accessible.

"Pregnancy looks different for every mother, but prenatal care is still being delivered through a one-size-fits-all-approach — even though it has nonsignificant effects on outcomes and leaves massive gaps in care," Juan Pablo Segura, President and co-founder of Babyscripts, said in a press release. He says that the idea for the app was born when he and his team saw the ways that mobile tech was transforming disease management, a transformation that he then applied to prenatal and postpartum care.

The Babyscripts app, four years in the making, is described as a "new model for prenatal and postpartum care." According to its website, it is the first mobile and clinical solution that provides remote care while maintaining patient satisfaction.

There is one catch to its accessibility, however: the ground-breaking application needs internet to function.

With new an improved technology on the horizon, it is only a matter of time that old school in-person doctor visits are replaced with up-to-date apps and virtual care. For your next pregnancy, will you be trying the Babyscripts app?

More Like This
Barre Could Be The Low-Impact Prenatal Workout You Need
When Does Pregnancy Horniness Kick In?
This Is What Experts Say About Eating Hot Dogs During Pregnancy
OB-GYNs On How The End Of Roe Changes How They Can Care For Us