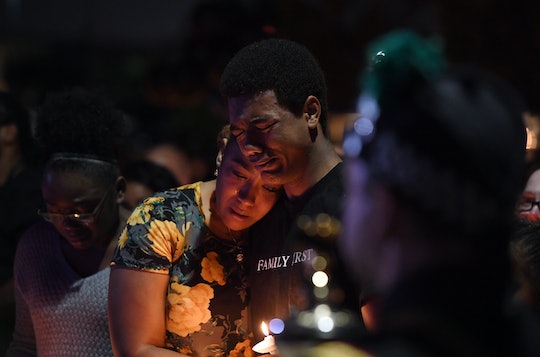 The mass shooting in Las Vegas last weekend earned the heartbreaking title of deadliest single-day mass shooting in modern American history, but only 16 months prior, that title was given to the mass shooting in Orlando, Florida, at the Pulse nightclub, which claimed 49 lives. And it had been only a little more than a decade since the previous most-deadly shooting, the 2007 massacre at Virginia Tech, where 32 people were killed. It doesn't take an expert to see that mass shootings are a frustratingly common occurrence in the United States, yet still, little is actually being done. One quote about Australia and gun control after Las Vegas though shows why the continued insistence that gun safety laws won't make a difference is unbelievably misguided — and why it is far past time that lawmakers in this country actually start taking steps to prevent mass shootings before another one inevitably occurs.

It's no secret that, in the United States, the issue of gun safety is one that sparks an incredibly polarizing debate. On the one hand, the fact that shootings like the one in Vegas keep happening leads many to argue that stricter gun safety laws are needed immediately. On the other hand, advocates of gun ownership argue that those laws would infringe upon their rights, and that they wouldn't actually make the country any safer. Yet this debate appears to be a uniquely American one: a recent editorial in The Sydney Morning Herald explains Australia's different approach to ending mass shootings, and why it's probably time that the United States follows suit.

According to The Sydney Morning Herald, since the 2012 mass shooting at Sandy Hook Elementary — an incident that seems like it should have absolutely been a turning point for gun legislation in the United States, given that 20 children were shot and killed — the country has witnessed 1,500 incidents that can be classified as "mass shootings." Not all of them, of course, made headlines the way the Las Vegas shooting did, but they all matter. And, to many Australians, the lack of progress on this front is truly baffling, according to an editorial in the Sidney Morning Herald on Tuesday:

It is incomprehensible to us, as Australians, that a country so proud and great can allow itself to be savaged again and again by its own citizens. We cannot understand how the long years of senseless murder, the Sandy Hooks and Orlandos and Columbines, have not proved to Americans that the gun is not a precious symbol of freedom, but a deadly cancer on their society.

It's not just a theoretical perspective though: in 1996, Australia had its own deadliest mass shooting, when a gunman used a semi-automatic rifle to kill 35 people near a popular tourist resort in Port Arthur, Tasmania, according to ABC News. The horrific shooting became known as the Port Arthur massacre, and it led to the country's National Firearms Agreement being passed only weeks later. According to BBC News, the law introduced a national firearm registry, a 28-day waiting period for gun sales, tougher firearm licensing rules, and also meant that anyone looking to purchase a gun had to "pass a thorough background check, and present a 'justifiable reason' for owning a gun." Prior to passing it, former Australian Prime Minister John Howard offered up a simple rationale: according to BBC News, he said, "We have an opportunity in this country not to go down the American path."

While many Americans may bristle at the Australian laws, it's hard to argue with the impact they've had. According to Vox, by 2013, firearm-related homicide rates had declined by 42 percent, while firearm-related suicides dropped by 57 percent. Those statistics alone should be an important wake-up call for United States lawmakers: according to Everytown For Gun Safety, there are nearly 12,000 gun homicides each year, and the majority of firearm deaths in the country — 62 percent — are actually suicides. But there's an even more compelling reason why Australia's gun reform shouldn't be ignored. According to Vox, Australia hasn't had a single gun massacre since the Port Arthur shooting. Not one.

Stateside, it seems pretty clear that the only thing the debate about the Las Vegas shooting has really done is highlight how far the country is from actually agreeing on how to prevent someone from bringing 23 guns into a hotel room and opening fire on a crowd of thousands of innocent and helpless people 32 floors below. Yet the Australian argument makes the lack of legislative movement seem honestly startling.

Will stricter gun safety laws impede personal freedom? Australians have a long history of shooting and hunting, and the country is also home to a vocal gun lobby that argues the laws go too far. But it's hard to argue with the reduction in gun-related deaths, and as Australia's former Deputy Prime Minister Tim Fischer told BBC News in 2015, "Plain and simple, what we've done works." And while not every Australian may agree, it certainly hasn't led to the destruction of the country and its value system. In fact, according to The Sydney Morning Herald, for many Australians, their progress is a point of national pride:

We point over and over to our own success with gun control in the wake of the Port Arthur massacre, that Australia has not seen a mass shooting since and that we are still a free and open society. We have not bought our security at the price of liberty; we have instead consented to a social contract that states lives are precious, and not to be casually ended by lone madmen.

But, of course, Australia is not the United States. It doesn't protect the right to bear arms, and with 50 states compared to only six in Australia, it would be much more of a challenge to get everyone on board with the kind of sweeping legislation that was passed there in 1996.

And let's not forget that we'd have to actually have lawmakers on board in the first place — an unlikely feat in itself given that the National Rifle Association has literally donated millions in support of many current House and Senate representatives, according to The New York Times, and also given that President Donald Trump appears to be reluctant to even discuss the issue of gun safety. On Tuesday, Trump told reporters that a political debate on gun control was "not for now," according to Reuters. And in a visit to Las Vegas' University Medical Center Wednesday, Trump reportedly avoided answering questions about gun violence, according to The Guardian.

There's no question that, to many Americans, the gun safety debate is one that is complex and nuanced. Addressing it in an effective way won't be easy, and progress could take time. But history has made it pretty clear that sitting back and offering little more than thoughts and prayers will do absolutely nothing to keep people safe.

The Australian strategy may not be one that America can, or should easily replicate, and it's far from being a perfect solution. But at the very least, it should be a lesson about the need to do something. Otherwise, it seems to be only a matter of time before we've got another deadliest mass shooting on our hands.