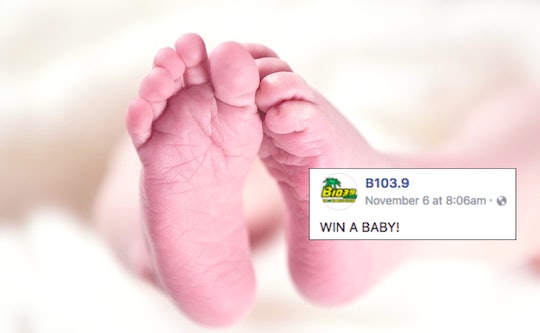 This Radio Station Is Holding A "Win A Baby" Contest, But It's Not As Bad As It Sounds

In vitro fertilization (IVF) often brings children to families that are otherwise unable to have them. Unfortunately, this method to grow a family doesn't come cheap. But, to cover the costs of IVF for one lucky family, one radio station is holding a "Win a Baby" contest and listeners seem thrilled — despite the less than stellar name.

Local Fort Myer's, Florida radio station WXKB 103.9 FM will pay for a round of IVF for the couple that creates the most compelling video explaining why they should be chosen. The idea for the contest comes from the station's host and DJ Jason "Big Mama" Jones. According to FOX 4, Jones and his wife used IVF after learning that they were unable to otherwise conceive. This is what led him to bring the procedure to another family that may not be able to afford the thousands of dollars that it could set them back. He told the outlet, "It is a large ticket to write a check for. We're giving you the opportunity to not have to worry about that check."

The "Win a Baby" contest is a collaboration between the radio station and an IVF clinic in Naples. According to the station's website, the contest description reads:

Big Mama and his wife have been going to IVFMD in Naples and now they want to take a lucky couple with them on this amazing journey of in vitro fertilization.

To enter, couples must submit a four minute-long video to the station by Nov. 24 for judges to review. The pair of contestants with the "most touching video" will receive a free round of IVF. Jones told FOX 4 that this is a very personal contest, explaining:

Whoever wins this is going to be someone with a heartfelt story going through that struggle. It's not just going to be like, "Caller 18, you randomly won tickets to go see Taylor Swift."

Jones has been very vocal about his and his wife's personal experience with IVF, keeping listeners apprised of each step along the way. He even shared his wife's ultrasound on Facebook to let followers hear the heartbeat. It is perhaps partially due to the personal touch that listeners and the rest of the public have received the contest so well, despite its arguably controversial name. One such person wrote on Jones' Facebook post about the contest:

Thank you for sharing your journey with Sarah, and thank you for doing what you're doing to give another couple the blessing of a baby[.] This truly amazing and may you be blessed for many years to come with your radio show and everything you do

Another simply said, "I'M SO EXCITED!!!"

The Florida radio station is not the first to host a "Win a Baby" contest. The station Hot 89.9 in Ottawa offered three IVF treatments to the listeners who wrote the most compelling 100-word essays. After receiving more than 400 entries, the station was so moved that it upped the number of recipients to five, according to Global News. In a similar situation, 97.1 ZHT host Frankie in Salt Lake City held a "Win a Baby" contest after his wife underwent treatment at Reproductive Care Center.

The Daily Mail reported that Hot 89.9 received complaints from some listeners who claimed that the contest was in "poor taste" and communicated the "wrong message" to children who are the product of such treatments. But, judging by the comments on Jones' post, fans of WXKB 103.9 FM aren't getting the same vibe. Even if the name is less than ideal, the idea of helping a family afford to have a child is a noble effort indeed.