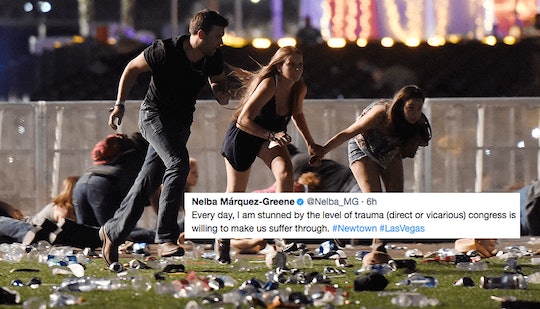 On Monday, as America struggled to make sense of yet another mass shooting — one that has just become the deadliest mass shooting in U.S. history for the second time in 16 months, no less — for one group of families, the pain hits all too close to home. This Sandy Hook mom's viral tweet about the Las Vegas shooting took Congress to task for its inaction on common sense gun safety laws, and her whole series of tweets about the issue of gun violence in America is a must-read.

Nelba Márquez-Greene is a mother from Newtown, Connecticut. Her two children attended Sandy Hook Elementary School when, in December 2012, a gunman took the lives of 20 young children and six teachers and staff — Márquez-Greene's 6-year-old daughter, Ana Grace, among them. Her older son, Isiah, survived the massacre. On Monday, Márquez-Greene took to Twitter to express her grief and outrage at the increasingly deadly epidemic of gun violence in America, with her tweets quickly going viral. Specifically, the aggrieved mother unleashed on Congress for failing to stand up to the gun lobby. Her viral Las Vegas shooting tweets began with a savage rebuke of Congress.

Márquez-Greene is right: Congress has failed to act since Sandy Hook. Despite lofty promises for gun reform following the death of 20 elementary school children at the hands of gun violence, common sense gun reform never happened. Immediately in the wake of Sandy Hook, Congress tried — and failed. As President Obama noted in his speech on common sense gun safety reform in January 2016, it was a GOP-led effort that tanked a bipartisan bill to advance federal background checks:

Márquez-Greene's continued her tweetstorm unabated, engaging with replies as they came in. Commentator Dan Hodges replied to her tweets, saying, "In retrospect Sandy Hook marked the end of the US gun control debate. Once America decided killing children was bearable, it was over." Márquez-Greene concurred, tweeting, "This is absolutely right."

She tore into Congress once again, blaming it in part for the fact that gun violence hasn't stopped, a sentiment shared by her own state's senator, Chris Murphy. On Monday, Murphy immediately issued a statement following the Las Vegas shooting, sharing his outrage that Congress still hasn't acted on gun violence since Sandy Hook. Murphy's Las Vegas shooting statement was scathing:

This must stop. It is positively infuriating that my colleagues in Congress are so afraid of the gun industry that they pretend there aren’t public policy responses to this epidemic. There are, and the thoughts and prayers of politicians are cruelly hollow if they are paired with continued legislative indifference. It’s time for Congress to get off its ass and do something.

Márquez-Greene's words are especially powerful given the return of Louisiana Rep. Steve Scalise to the House floor on Thursday. In June, Scalise nearly died from gunshot wounds he sustained when a gunman attacked a Republican baseball practice in Virginia. There was speculation at the time that when "one of their own" had nearly been killed by gun violence, Congress might finally do something to tackle the problem of guns in America — but to no avail.

Perhaps the most damning tweet by Márquez-Greene to Congress was her last tweet on the subject of Congress' inaction — and the one in which she invoked her daughter, Ana Grace:

As Márquez-Greene's painful and brutal tweets show, how many dead people will it take for Congress to finally address the gunmetal steel elephant in the room? When is enough enough?