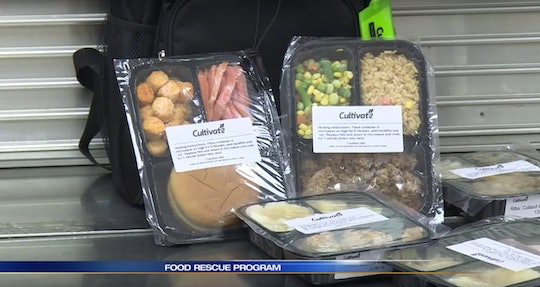 Not all kids eat their lunch. Which is bad enough for the student in question, but even worse in the sense that it's a lot of food waste in a nation in which families are still going hungry. Plus, kids who are part of school lunch programs don't necessarily have plenty to eat when they're not in school. That's why I was happy people are thinking outside the box to come up with answers, and this school district's solution for unused cafeteria food makes sure students are fed all day and that good cooking doesn't go to waste.

As ABC's KTXS News 12 station out of Abilene, Texas, reported, a school district in Indiana has come up with an innovative strategy to make sure that students who rely on meals provided at school get their nutrition when class is not in session.

South Bend-based nonprofit Cultivate paired with Elkhart Community Schools to create a pilot program in which weekend meals were given to a small group of elementary school students, per South Bend, Indiana's CBS affiliate, WSBT. The catch? It was simply the food the school district's cafeteria had not served or used otherwise.

"At Elkhart Community Schools, we were wasting a lot of food," said Natalie Bickel of the district's student services department. Enter Cultivate, a self-described "food rescue" organization, according to NBC's KHQ Channel 6 in Spokane, Wash. "There wasn't anything to do with the food. So they came to the school three times a week and rescued the food."

"Mostly, we rescue food that’s been made but never served by catering companies, large food service businesses, like the school system," KTXS quoted Jim Conklin of Cultivate as saying, adding that you "don't always think of a school."

As bad as it sounds that the school district makes simply too much food for its cafeterias, Conklin noted that it's pretty much a given, and I'm imagining it's related to cooking for such a large volume of people, and having to "guesstimate."

The nonprofit's solution for erasing hunger in Indiana is pretty epic. "We take well-prepared food, combine it with other food and make individual frozen meals out if it," noted Conklin, as per KHQ News.

The happy result is that 20 students from Woodland Elementary will receive a backpack with eight individual frozen meals every Friday until the end of the school year to tide them over through the weekend, as KHQ reported.

Luckily, officials involved say this won't be the last of such programs. South Bend's Chamber of Commerce’s Leadership Academy, which helped get the pilot program off the ground, celebrated the launch.

"It’s making a big impact," said Melissa Ramey of the Chamber, according to KTXS. "I am proud of that. It was heartbreaking to hear that children go home on the weekends and that they don't have anything to eat."

WSBT also noted that the school district wants to put the program place at other Elkhart schools.

This is so great to hear, because it's only using the resources that are already in place for good. Now let's get fixes like this going in every city across the country so that no child has to wonder where his or her next meal is coming from. This should be a given in a wealthy nation such as ours.

More Like This
Dads Share What Paid Family Leave Would Mean To Them In Heartwarming Video
Exclusive Eureka! Clip Introduces Star Of Disney’s New STEAM Preschool Series
How To Explain Juneteenth To Your Kids — With Joy & Truth
Can The Baby Have That?