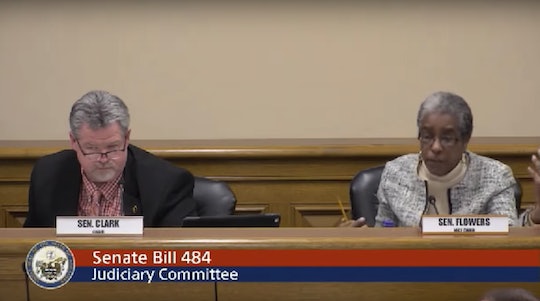 A passionate speech that shook the floor of the Arkansas State Senate on Wednesday is taking the internet by the storm. A video from the state Senate's debate over the state’s proposed "Stand Your Ground" bill shows a state senator giving an impassioned speech defending the lives of Black children as the Republican opposition rushed to dismiss the topic and move on. In the video, state Senator Stephanie Flowers, a Black Arkansas senator and mother, slammed the legislation and criticized its supporters.

"It doesn’t take much to look on the local news every night and see how many Black kids — Black boys, Black men — are being killed with these 'stand your ground' defenses that these people raise," Sen. Flowers began. "I'm the only person here of color. I am a mother, too, and I have a son. And I care as much for my son as ya’ll care for ya’lls. But my son doesn’t walk the same path as yours does, so this debate deserves more time."

Sen. Flowers' speech came after other state senators tried to cut short debate over the proposed bill. "I can tell you that for a long time since I’ve been back here in Arkansas, I have feared for my son’s life!" she continued. "You don’t have to worry about your children, Will. I worry about my son, and I worry about other little Black boys and girls. And people coming into my neighborhood, into my city, saying they got open carry rights, walking down in front of my doggone office in front of the courthouse."

When the committee chairman Sen. Alan Clark warns Flowers she "[needs] to stop," Flowers erupted, "No, I don’t! What the hell are you gonna do? Shoot me?"

The impassioned speech Sen. Flowers gave was in response to a proposed "Stand Your Ground" bill that was sponsored by three Republicans, which would have removed the state’s requirement for residents outside of their homes to retreat before using deadly force as self-defense, according to The Washington Post. The legislation ultimately failed to pass by one vote.

Since 2005, 26 states have passed Stand Your Ground laws despite the fact that they are associated with an increase in firearm homicides and fail to prevent crime, according to Everytown For Gun Safety. According to a 2016 study published in The Journal of Human Resources, at least 30 people are killed each month in the United States as a result of these laws.

Stand Your Ground laws have also been shown to have a racial bias that disproportionately impacts Black communities. A 2013 analysis of FBI homicide report data conducted by Dr. John K. Roman indicated that homicides of Black victims at the hands of white shooters are deemed justifiable 11 times more frequently than if the shooter was Black and the victim was white. Another study in Florida, where Stand Your Ground laws were first adopted in 2005, according to Washington University in St. Louis' Institute for Public Health, revealed that defendants who use the "stand your ground" defense in fatal altercations and whose victims are people of color are let off the hook twice as often than if the victim was white.

In this context, it’s no wonder Sen. Flowers' speech, after which she walked out in protest, against the proposed Stand Your Ground bill struck the hearts of many across the nation.

"Behind every strong Black woman standing up for herself, there’s always a privileged [White] man trying to silence her. I love how relentless she was," one Twitter user said.

Another added, "Listen. Liiiistennn. It's about time we ALL really listen. The threat is REAL and change is imminent. #SenatorFlowers I salute you. #InternationalWomensDay."

Others personally connected with Flowers' speech. "I felt this in my soul," yet another Twitter use wrote. "I'm going to write her and thank her for this."

And gun safety activist Emma González took note of the speech as well, writing, "she knows what's right and she knows what's wrong — I thank Senator Flowers for being the voice of reason in this fight against gun violence."

One thing is for certain: Flowers stood her own ground against the proposed bill, refusing to be silenced on the subject.

More Like This
Can States Ban The Abortion Pill? FDA Rules May Make That Hard
Taraji P. Henson Says “Guns Have More Rights Than A Woman” At The 2022 BET Awards
Here’s How To Fight For Abortion Rights
Obamas Issue Powerful Statements After Supreme Court Ends Roe v. Wade