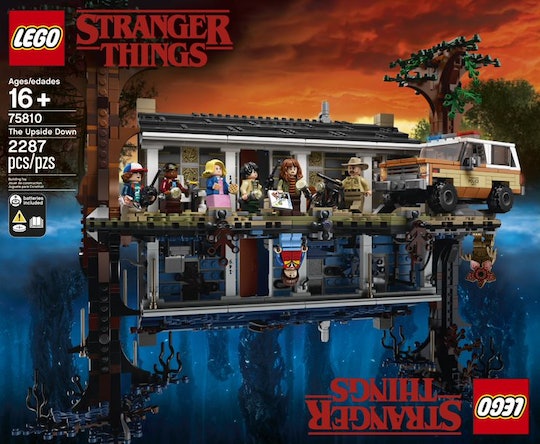 Sometimes being a grown up is tough and here I am going to tell you why: New toys. I am technically not supposed to play with toys any more since I raised four sons and pay car insurance and such, but every once in awhile there's a new toy that comes out that tempts me. That reminds me how much fun it is to be a kid. This happens with shows too — Stranger Things on Netflix, for instance, especially since I could have totally been a Hawkins kid myself. So you can imagine the seductive pull I feel towards this new Stranger Things LEGO set. Fortunately, I can probably find a kid to build it with me in a nod to social norms.

The massive 80s-themed Netflix phenomenon from the Duffer brothers about some kids who find an alternate world called the Upside Down is getting ready to launch its third season on July 4. And to celebrate this exciting news, LEGO has developed a new Stranger Things-inspired LEGO set that takes the whole Upside Down thing as literally as it could.

On June 1, (or May 14 for LEGO VIP members), LEGO and Netflix will release a super clever new building set that can actually be flipped upside down, which is obviously double the fun.

So here is what you can build with the new Stranger Things set from LEGO; the Byers' house, where Will Byers went missing and then his mom Joyce chatted with him via Christmas lights and then at the end they all had a nice family dinner and tried to pretend things were normal. This set also comes with the dreaded Demogorgon who took poor Will in the first place.

I know it's not possible or anything, but can we just talk about how amazing it would be if Eleven's little mini figure could get nose bleeds and move the other figures with her eyes and intensity? That's too much, I know.

The beauty of this Stranger Things LEGO set is that you get two entire sets for the price of one — and that price will be $200, by the way. On one side is the Byers' house, where a person could do things like, oh I don't know, make Chief Hopper and Joyce Byers have a romantic dinner or something. Then, when the Chief and Joyce go off for a walk you can flip it over and Eleven and the guys can be battling the Demogorgon in the Upside Down.

This is a mini-set, so keep in mind the rooms are going to be pretty scaled down but let's not get negative here. The truth is this Stranger Things LEGO set could be the secret to family harmony. Because all of us bored grown ups secretly want to play with toys and this might be our way in. (The recommended age limit 16+, so also keep that in mind with your little ones.) Dibs on Chief Hopper. I am still a grown up lady, after all.

More Like This
Who Is Eleven's Mom On Stranger Things? Here’s What We Know...
13 Parenting Lessons From ‘Stranger Things.’ Because Children Are Demons.
Meet Your New Favorite Blazer(s)
11 Doctor-Recommended C-Section Scar Removal Products