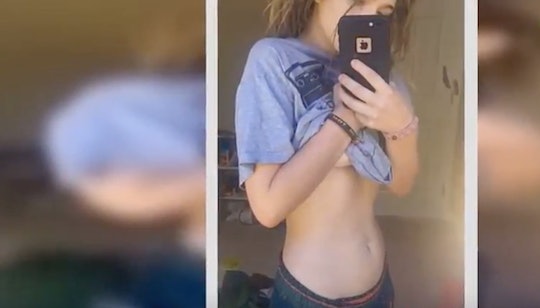 Social media can be a great place for pregnant people to share updates about their pregnancy with family and friends. The dark side of apps like Instagram and Facebook, however, is that they open up the door to needless criticism from strangers, which is exactly what happened to this pregnant teen who is being attacked for her bump size. Apparently, some people believe the teen is faking her pregnancy because of her supposedly small bump.

Reanna Stephens, an 18-year-old college student from South Carolina, is fighting back against claims that she's lying about her pregnancy, which is something she felt compelled to do after people started questioning the size of her bump. Stephens, who is reportedly six months pregnant with a baby boy, according to The Daily Mail, regularly posts photos of her bare bump on Instagram and some of her followers are having a hard time believing she's actually pregnant.

Unfortunately, many people assume there's a right way to look while pregnant. Take Khloé Kardashian and Kate Middleton, for example. Both Kardashian and Middleton were recently criticized for their so-called "small" bumps, which is definitely not OK.

In the case of Stephens, however, the size of her bump is generating claims that her pregnancy isn't even real. Stephens said of the unwarranted backlash, according to The Mirror:

People have asked me: 'You're not faking your pregnancy, are you?' 'Are you sure your baby is healthy?' as well as people telling me I need to eat more and see a doctor in case I starve my child. 'I have also been told that I shouldn't be having a baby if I can't feed myself, but people know nothing about my diet or lifestyle.

As for Stephens' lifestyle, she attributes her "small" bump size to her vegan diet and consistent workout regime. Stephen explained, according to The Sun:

I have done mixed martial arts for six years, including boxing, kickboxing, jujitsu, circuit training and weight training along with yoga and cardio. Now I only do yoga and cardio, but this is part of the reason for my slender physique. I also eat a vegan diet, so I don't have any animal products, and avoid unhealthy foods such as fizzy drink, sweets and junk food.

Of course, Stephens doesn't have to defend her lifestyle to strangers online, and it's important to reiterate that there's no "right" way for a bump to look. Nor is it true that a baby is unhealthy or underweight if its parent isn't sporting a particularly visible bump.

In fact, Jim Pivarnik, Ph.D., a professor of kinesiology at Michigan State University, confirmed to Glamour that the outside appearance of a bump has nothing to do with the actual health of baby. Pivarnik told the outlet:

What’s important is what’s inside, how well the baby is growing, and whether a mom is gaining enough weight. All of those questions are much more important than how you put the weight on and where.

Another thing to consider about the size of a bump is genetics. Stephens told Us Weekly that her mom had a "similar" pregnancy to her own, explaining:

My mother was in a similar situation when she was pregnant. She was an athlete and she didn’t show until she was seven months pregnant. Although I’m much smaller than her, I believe being active has a part to play in the size of your bump.

And since this is Stephens' first pregnancy, it's no surprise she isn't showing in the same way person who's pregnant with their third child might, for example. In first pregnancies, a bump typically develops between 12 to 16 weeks, according to Baby Centre.

Luckily for Stephens, she does have some supporters in her corner. One person said, according to Stephens' Instagram account, sunflowerhazee:

Congrats on the baby! my belly was like yours. i read you were vegan and i'm a vegetarian. women carry their babies differently. some gain a lot of weight and others only gain a little. i didn't start showing until i was about 7 1/2 months! i only gained 20 pounds and i went straight back to my original weight/belly and now i weigh even less. good luck on the little one. praying you have a safe delivery!

Clearly, there are plenty of people out there who can relate to Stephens' story. Hopefully Stephens will bring more awareness to the fact that not every pregnant person shows the same, and it's never OK to make assumptions about someone's health.