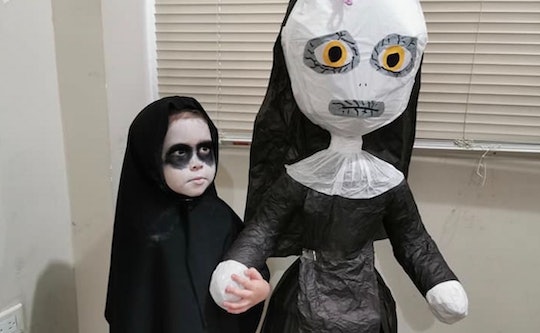 When you envision a 3-year-old's birthday party, you probably imagine pretty gender-normative themes, like princesses, trucks, fairies, and plenty of Disney characters. However, for one iconic Wednesday Addams in-the-making, anything less than a full-out horror party just wouldn't suffice. Really, this toddler's creepy birthday party themed after The Nun is oddly adorable, and the internet can't get enough.

Lucia Brown seemed adamant that she wanted a birthday party inspired by the 2018 horror film, The Nun. Her mother, Laura Brown, told Good Morning America that her daughter loved the film after catching a glimpse of it at her grandmother's house. “I kept asking her for months and the answer was always the same: ‘The Nun. The Nun. The Nun.’ I told her, ‘No way, you are going to choose Rapunzel,'" she told GMA.

However, Lucia got her way and the kiddo's party started to get some serious attention when her cousin, Andrea Villarreal, tweeted a few photos of the event, saying, “So it was my [cousin's] 3rd birthday and instead of having a normal theme she chose this."

Villarreal shared photos of Lucia dressed like the nun, standing next to a replica of the nun, and blowing out the candles on a coordinating birthday cake. "And if anyone was wondering yes her friends also participated in the theme," she added on Twitter, sharing photos of Lucia's friends with face makeup on as well.

In the photos, Lucia is seen standing in a full-length, black nun's habit, with her face painted white and black, to signify a ghost-like appearance, with blacked-out eyes. She also had a nun-inspired doll that was just a bit larger than her to stand next to, who was also dressed the same, with similar makeup.

She blew out the candles on a cake that had a photo of the actual character of the nun printed on it, and her name underneath. The frosting, as one would imagine, was black and white.

Finally, the last photos are of Lucia standing with one of her friends who attended the party, and went fully in on the theme as well. Though she's wearing regular clothes and not a costume, her friend did also have white and black face paint, to be a "nun ghost" as well. (This is true friendship, and it is admirable.)

Of course, the internet has had a pretty polarized response to the photos, which are now trending upwards of 137,000 retweets and 500,000 likes.

The responses ranged from being kind of creeped out, with some people playfully saying they'll be sleeping with "one eye open" from now on, to others that were happy for her, saying she's definitely going to become an eclectic director someday. Others yet are pointing out that it's kind of cute, and that she's like a character from the Addams family.

Her story also garnered the attention of some high profile individuals as well. Horror actor and director Jordan Peele retweeted the post and inquired: "Does she have a godfather?" insinuating that he'd love to be considered for the role (and hey, maybe a horror collab between them could come from it?)

Regardless, everyone seems glad to see a little girl so thoroughly enjoying her birthday party, eschewing gender and uh, human norms, and being an icon as she does it.

More Like This
Reddit Is Not Impressed With Dad Who Hid Neighbor's Gnome Because It Scared His Kid
'Squid Game' Is Coming Back For Season 2 On Netflix: Here’s What Parents Need To Know
5-Year-Old Boy Died In Hot Car As His Family Prepared For Sister's Birthday Party
30 Birthday Party Hacks That Will Blow Your Mind