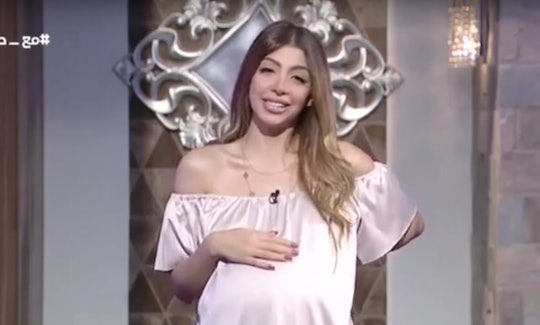 Even though it's 2017, women's rights aren't human rights everywhere in the world. For example, an Egyptian TV presenter was sentenced to three years in prison for talking about getting pregnant outside of marriage. She reportedly suggested that there are ways for a woman to have a baby without having a husband, which prompted the outrage. Although this event took place over on another continent, it's still a major jab to women's rights across the globe.

According to the BBC, "Doaa Salah, a presenter on Al-Nahar TV, asked if her viewers had considered having sex before marriage, and also suggested a woman could marry briefly to have children before divorcing." To put it simply, these comments were not well-received in the ultra-conservative country.

Because of these comments, Salah was reportedly "convicted with outraging public decency," the BBC reported. But that isn't the end of this saga: Salah's show — With Dody — was "suspended for three months by Egypt’s media union which said the discussion 'promoted immoral ideas that are alien to our society and threaten the fabric of the Egyptian family,'" according to AfricaNews.com.

On top of the suspension and sentencing, Salah was also fined 10,000 Egyptian Pounds for her alleged crimes, which equates to about U.S. $566. Salah was also accused of other indecencies on her show, including wearing a fake pregnancy bump, as Jezebel noted.

The idea of something like this happening in the United States seems reprehensible, but state-controlled media outlets aren't actually all that rare across the world — especially in the Middle East — where democracy and freedom of the press aren't necessarily commonplace. Nevertheless, it's still concerning that Salah was given such a harsh punishment when her actions and comments were essentially harmless, as many in Western countries may perceive them.

But, despite this backlash, Salah actually had made some fairly good points in her program. Per the BBC, she also "spoke about how sperm donation is an accepted method in Western countries — but not in Egypt."

Salah's remarks that a woman should be able to have children without being married or in a relationship aren't necessarily revolutionary here in the United States, but in Egypt, it's a completely different story. Unfortunately, as the BBC reported back in 2013, "Egypt is now the worst country for women's rights in the Arab world, according to a poll of gender experts." So although Salah's sentencing is quite disconcerting, it's not actually all that shocking.

In fact, Salah isn't the first female television personality in Egypt to be so harshly punished for her thoughts and opinions. Per Jezebel, "Another presenter on the same channel, Reham Saeed, was suspended for three months after spending an episode discussing extra-marital affairs."

Another important factor in this debacle is the fact that Salah is a woman. One has to wonder, if she were a man, would the punishment be as severe? Not likely. For example, according to The Independent, a male lawyer had made a claim on Egyptian television that if a man sees a woman out in public dressed immodestly, "it is a patriotic duty to sexually harass her and a national duty to rape her." Yet, these comments have yet to result in any form of punishment for the lawyer — Nabih al-Wahsh, who happens to be a prominent man in Egypt — the publication noted.

Salah's punishment might seem extreme to those outside of Egypt — and perhaps to some within — but culture is rooted in history and as the BBC noted, Salah's comments allegedly "threatened the fabric of Egyptian life." Still, no matter where you are in the world, it's hard to ignore the underlying issues with all of this.