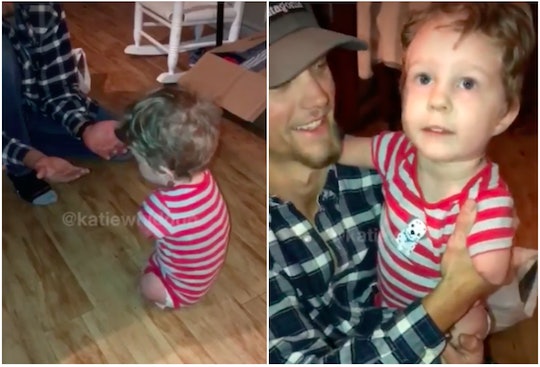 If you need something inspiring and hopeful to get you through the Thanksgiving holiday weekend, I have something so much better than a ton of turkey for you. Allow me to direct you to this amazing video of a little boy born without any limbs taking his first steps. It's super sweet and shows just what a little determination and a whole lotta love can accomplish.

Camden Whiddon is a 4-year-old boy from Texas who was born with amelia-phocomelia, a birth defect which means a person has shortened or no skeletal limbs at all, according to his family's blog. His mom, Katie, was just 19 years old and 18 weeks pregnant when she saw the ultra sound that showed he didn't have any arms or legs.

She told People, "When I first found out he wouldn’t have arms or legs, I thought that he would just be a vegetable. I didn’t know what to expect. I had just turned 19 and I didn’t know, ‘Am I gonna be able to be good enough for him?’"

The mother of three went on to tell People, "When he was around 2 months old, I had him laying on my bed … I saw him out the corner of my eye and he was hitting the toys with his arms. I started to cry, I was just so happy and that confirmed that he was gonna be able to do things." She was right.

This Sunday, He Took His First Steps.

Whiddon filmed her son taking his first "steps" with her boyfriend, Cole Greene, who is heard coaching his son Camden as he slides across the floor. "I’m coming to you ... I’m walking,” the toddler says in the video as Greene encourages him to keep going.

The 23-year-old mother told People, "We started crying, we were so proud, I didn’t know when that day would come. I didn’t think he was ready for it yet and I was just so shocked and happy. It was so exciting and [his 3-year-old sister] Ryleigh was over there jumping, excited.”

She added, "I had so many doubts at first, but he’s just shown me how I don’t need to doubt him.” Being able to walk has shown her that her eldest son is bound for amazing things. Whiddon has some big dreams for him, too, according to People. She gushed:

Whiddon's gone viral before. In September, she posted a video of little Camden helping his baby brother Jaxton, born in July, with his pacifier. While his baby bro cries in the crib, Camden rolls over and nudges the pacifier in Jaxton's direction, who eventually takes it and quiets down. The video was shared so many times that, as Whiddon wrote on her blog Admirably Diverse, they almost ended up on The Ellen Degeneres Show.

Whiddon often posts videos of her son doing all sorts of things in attempt to show that he's perfectly capable of doing everything kids without his condition can do.

And Chowing Down On Dinner

Whiddon wrote on her blog earlier this year that Camden is just like every other toddler his age, despite his limb difference. "He picks his nose, thinks farts are funny, never stops talking, and is always messing with his younger sister. He can draw, paint, sit up by himself, feed himself, wash his own face, brush his own teeth, climb up stairs, and so many other things."

Now he can add walking to that list of hobbies and likely tons of other great things in the years to come.