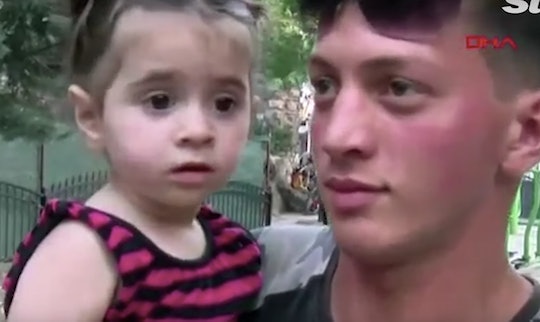 When you become a parent, you worry about a lot, particularly if you're someone who lives in an urban environment in which physical risks and dangers are perhaps more prominent. Though not for the weak of heart, this video of a teen catching a falling toddler will both make your jaw drop and also possibly make you believe in miracles.

Feuzi Zabaat, 17 years old, had spent the day working on the streets of Istanbul, Turkey, when he was greeted with a rather unexpected surprise, as Good News Network reported. While waiting on the sidewalk, he looked up to see a little girl falling out of a second-story window. That girl, 2-year-old Doha Muhammed, had walked toward the window while her mother was cooking dinner, according to the BBC.

As he realized what was falling, Zabaat put his arms out and was able to actually catch the little girl — and saved her life. Once bystanders realized what was happening, they all fled to help him, as she was mere inches from hitting the sidewalk. As a means of saying thank you, the Muhammed family reportedly offered Zabaat 200 Turkish Lira, or the U.S. equivalent of $35, for saving their daughter's life. However, he did not accept the reward money, as he felt he was "happy to do the right thing," according to Good News Network.

As with anything that makes its way to even vague popularity on the internet, the reactions from viewers on YouTube has been mixed, with many praising the teen for being a hero, while others admonish the parents for allowing their daughter out of their sight. Thankfully, though, the positivity took over.

"It's at times like these that I am proud to be a part of humankind! He deserves a medal for doing what he did," read one comment. "Catch of the century," said another. "He saw, he anticipated... and he saved a beautiful life," said yet another.

But, as for those who seem concerned that the individual in question would be a "better parent" than the ones who allowed their daughter out of their line of vision for a few moments while cooking dinner likely do not have children themselves. ("You should just give the toddler to him," one particularly blistering comment read.) But the reality is that it is impossible to supervise every single moment of your child's life, nor is it healthy.

Part of what makes this moment so incredible is how it could truly happen to anyone. The reality is that kids, and particularly toddlers, have a tendency to find their way around any place they should not be.

The point is that something truly miraculous happened on the streets of Turkey this week, and instead of deciding who is and isn't a capable parent, we should recognize that it's a terrifying reality that could truthfully happen to any one of us, and we should all truly hope that there would be someone like Zabaat standing outside our windows to come forth and save the day.

More Like This
Reddit Is Not Impressed With Dad Who Hid Neighbor's Gnome Because It Scared His Kid
'Squid Game' Is Coming Back For Season 2 On Netflix: Here’s What Parents Need To Know
Blue Ivy Is Every 10-Year-Old Trying To Be Cool Around Her Dad In This Adorable Video
Viral TikTok Breaks Down How Beautifully Bluey Depicts One Character’s Infertility