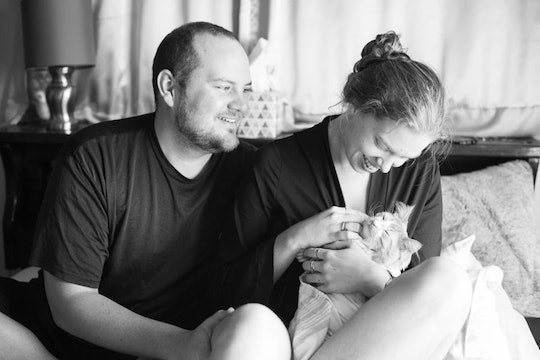 This Viral "Birth" Announcement Is So Hilariously Brilliant

Making the decision to add a new addition to your family is a big one. There are so many variables that go into that discussion between you and your partner. And once that decision is made final, it can alter your life as you know it, forever. I'm talking, of course, about the decision to get a pet. And if you've ever had to make that huge decision in your life, then you'll understand why this viral "birth" announcement is so hilariously brilliant.

There is a reason why pet owners call themselves "pet parents" or parents to "fur babies" — because loving and caring for an animal requires just as much time, devotion, and attention to it as a baby does — especially if that animal is under a year of age. But when it comes to introducing a new pet to friends far away, it's hard to do so, especially if those friends can't come over and meet the pet themselves. So, posting about it on Facebook is obviously the most sensible option. But why not take it a step further like these pet parents, Lucy Schultz and her partner Steve, who announced the adoption of their cat through the most hilarious Facebook Life Event and photoshoot — by pretending to give birth to it (it's not as crazy as it sounds).

In the Life Event post, Schultz announced the cat's arrival like every doting mother would, even down to the little details like the cat's weight and height. You will fall in love with the announcement and the photos from the photoshoot, too.

The photos are absolutely incredible, if only for how real they seem. Surely some moms out there can see the resemblance to their own birth announcements or birth photos if they, too, had a photographer in the room. And the photos tell a great story, too. You can see the pain in Schultz's face, the excitement in her partner's expression, and the relief in both of them once the "birth" was over. But Schultz, who is a photographer based out of Colorado, probably has some experience in looking at a lot of photos like these.

Schultz explained to Yahoo! Lifestyle that she had been fostering kittens her whole life. But it wasn't until recently when Schultz and her partner felt as if they were ready to bring a kitten into the world, which is also when they found "the one." So, to celebrate, Schultz came up with the viral idea with her best friend, Elizabeth Woods-Darby who took the photos. Schultz explained the concept to Yahoo Lifestyle, saying:

A year ago, I was so excited for the day I'd get to have my own cat that I told my friend Elizabeth I was thinking about doing a baby/kitten announcement after I adopted. She was equally pumped about the idea and immediately jumped on board with her own ideas, and it just snowballed from there, as things do when you're with your BFF. We looked at some birth photos and said, "Yeah let's take it to the next level."

This "next level" announcement definitely must have resonated with a lot of people. In the two days since announcing the birth of their "new baby," Schultz's Facebook post has gained over 57,000 shares and 29,000 comments with people talking about how great the photos are and how funny the announcement is. And it doesn't hurt that their unnamed baby kitten is perhaps the cutest cat you will probably see all day. I wouldn't mind welcoming that "bundle of joy" into my home, either.

But Schultz told Yahoo! Lifestyle that the cat has no idea about his own viral fame and that he is getting settled into his home life. "We are just teaching the little guy about boundaries and fish tanks since we have two tanks in the house that he's very curious about," Schultz said.

While Schultz's photos are absolutely hilarious, she isn't the first "cat mom" to make an announcement on this level. In April, a photographer in Michigan, Kitty Lee (no pun intended) staged a newborn photoshoot with her daughter's 9-week-old cat, Luna. The photos were absolutely gorgeous and went viral as well.

With so many cat photoshoots going viral, this fun and hilarious fur baby announcement could be a new "thing." Personally, I wouldn't mind. These photos are absolutely amazing and so fun to look at.