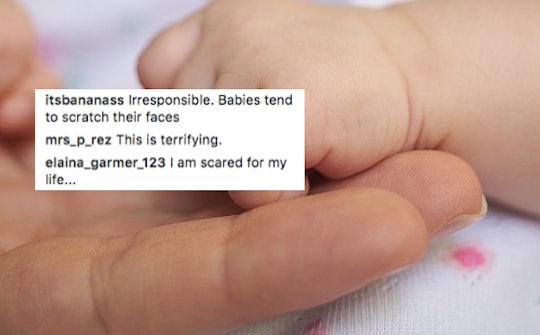 They're cute, innocent, and their little heads smell so darn good, but can we all just admit that tiny little babies are totally creepy and gross sometimes? Just in case your own kids aren't skeeving you out now and again, here's a little reminder. Take a peek at this viral photo of a baby's long fingernails and just try to not be a little bit shocked.

Sorry, but they're pretty nasty. It's not clear where the picture originally came from, but it was posted on the Instagram account @daily_earthpix and people are losing it. Most of the responses are some version of "WTF" and "This can't be normal!" Aside from the creep factor, some people were seriously worried for the baby. Usually, parents tend to keep an infant's nails cut short primarily so that the baby doesn't scratch itself or poke itself in the eye and potentially hurt itself.

And it's not just for the baby's safety — parents on WhatToExpect.com share stories about being impaled by tiny little baby fingers. One parent wrote, "I have scratches on my chest and face from [my baby's] nails. Even her toe nails get very sharp and they grow out so fast I feel like I'm trimming them every other day."

Not long after the photo was shared, a slew of shocked comments came rolling in.

At Least They're Seasonal?

"Demonic" Is A Little Much

OK, It's A Little Creepy

It's hard to know when to actually cut your newborn's nails, since you don't want to hurt the little things, but it has to be done. Remember, there's no information about the original poster or what this baby's situation is, so no need to throw judgement around. Except finding it totally difficult to not look at them even though you really want to stop looking at them.

According to the pros over at Medline Plus, which is hosted by the U.S. National Library of Medicine, baby nails on both their hands and feet are usually soft and flexible. They recommend, "It is important to keep your baby's nails clean and trimmed. Newborns do not yet have control of their movements. They may scratch or claw at their face."

Whatever you do, don't use regular adult trimmers. The best way, according to Medline Plus, is to use an emery board to file them down. After a bath is a good time, but it also means their super soft nails will be even softer, making it possibly harder to clip or file. You can also use baby nail clippers or scissors in place of the emery board.

However, as any parent knows, what the experts recommend and what actually works is an entirely different story. Like, how the heck do you keep a an infant sitting still long enough to actually cut these suckers? And what if your kids' nails aren't all that soft and grow back to be sharp and dangerous like, every other day?

Also, if your child doesn't have thick, long, claw-like, but also rather perfectly manicured nails like the infant in the picture, it can be hard to tell where the nail begins and the skin ends, which means you risk clipping their teeny little fingers. To avoid that, you can press down on the nail and gently pull the nail away from the skin, according to the Dr. Sears website. If you have a partner around, you can ask them to hold the infant while you work on the nails — it's not a one-person job sometimes.

And if you really can't bring yourself to do it and are totally scared you're going to scar the baby for life, you can totally let them grow creepy claws. Just put adorable little baby mittens on their hands. For their safety, of course, but also so you don't have to look at them, because it's indeed an odd sight to see.