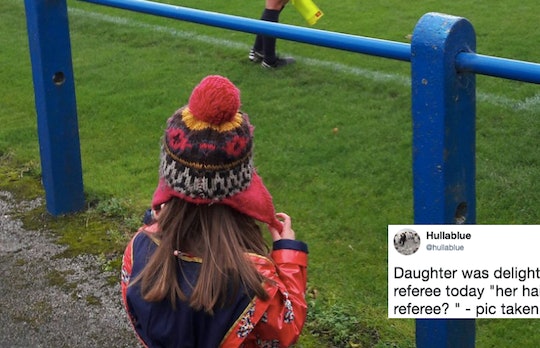 It's no secret that little girls haven't always been afforded the same opportunities as little boys. And unfortunately, women don't always have the same opportunities that men do, either. So, when a young girl is able to see strong, female role models doing something that only men have predominately done for years, it's a great sight to see. And that's exactly why this viral photo of a little girl admiring a soccer referee is so, so special.

On Saturday afternoon, according to Scary Mommy, Twitter user and father Nathan Walker, tweeted out a photo of his daughter at a soccer game. And while it's, of course, nice to see any family out enjoying some quality time together, this particular photo is truly something special. Why? Because Walker's daughter, 4-year-old Clara, wasn't just admiring the referee for doing their job. No, Clara was admiring the referee because she was a female and she looked like her. Clearly, something Clara wasn't used to seeing.

While it's disappointing that it's taken so long for little Clara to see a strong female working as a referee, it's pretty inspiring that her father was able to capture the moment his daughter realized that she, too, could be a referee if she so pleases.

"Daughter was delighted to see this assistant referee today 'her hair is like mine, can I be a referee?'" Walker captioned the viral photo, which has been liked more than 16,400 times and garnered more than 4,200 retweets.

Needless to say, people were enamored with the photo and the message it conveyed:

"She normally says the referees are her favorites as black is her favorite color," Walker told Scary Mommy. "But they really were yesterday as it was the first time she had noticed a women [sic] official."

Walker makes an important point — it wasn't until 2015 that the NFL hired its first female referee, according to ESPN, and that isn't the only instance of sexism prevailing in professional athletics. In fact, just Googling the term, "female referee" will bring about an unfortunately low number of responses.

What's more, while female referees are still low in number, they continue to fight mistreatment and sexism at work. In July of this year, for instance, a female referee was replaced during an NBA game following a call she made which upset a player's father, LaVar Ball, according to USA Today. Ball then went on a sexist rant against the referee, just for doing her job. Here's what he said, as the outlet reported at the time:

If you’re going to be qualified, you better be in shape, and you better know the game. And she’s bad on both of them. She’s not in shape, she’s not calling the game right, and she don’t understand, so now she’s trying to make a name for herself. So she’s walking around like, ‘I’m the only woman in here.’ Yeah, we get it, I don’t care if you a woman or a man or whatever, just be good at what you do.

Obviously, little Clara's sense of wonderment at seeing a female sports official is justified. The NBA has only had three female referees in its history, the NFL has had just the one, the NHL has had one, and the MLB has had one female umpire.

Of course, there are more female referees in the minor leagues and local organizations, but Walker's tweet still shows that representation matters. Four-year-old Clara shouldn't have been shocked to see a referee that looks like her. But unfortunately, it still isn't commonplace.

And with the truth that female referees are continued to be discriminated against, treated poorly, and lack proper representation, Walker's tweet and Clara's reaction are both timely and heartwarming. Because even though Walker hails from West Yorkshire, it's clear that, even across the pond, there aren't enough female referees out there in the world. But, who knows? Maybe one day, little Clara will be one more female referee, breaking boundaries, and glass ceilings. All in a day's work, right Clara?