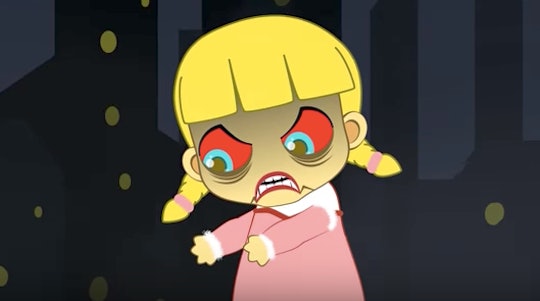 It's not totally unreasonable for a busy parent to think that if they set certain filters, or use an app like YouTube Kids, their kids can safely be left with a tablet or other device to entertain themselves with YouTube videos for a little while. But as it turns out, some disturbing videos can easily get past the YouTube Kids app’s filters, according to The New York Times. And experts say parents need to monitor what their kids watch on YouTube, and step in when disturbing videos pop up.

"Knock-off videos" including popular characters from kids' programs, Disney cartoons, superhero movies, and more are hiding in plain sight on YouTube, according to Fast Company. For example, in just one video Spider-Man and Elsa from Frozen were shown "exchanging automatic gunfire with The Joker."

The title of that particular video is reportedly "Bad Kids & Learn Colors Giant Watermelon Finger Family Song Nursery Rhymes | Learning Video For Kids," which clearly doesn't at all reflect the bizarre images in the video itself. In a case like that, it's possible that a parent could search for something like "learn colors" or "nursery rhymes" and unwittingly expose their kids to violent and disturbing imagery.

That's why experts are advising parents to watch a little more closely when their kids are using YouTube or YouTube Kids, even if you have safeguards in place to prevent mature content. Because unfortunately, experts say the videos could bring up all sorts of issues for kids that parents probably wouldn't anticipate when they sit them down for an innocent Paw Patrol video-viewing session.

Staci Burns, a parent from Indiana, told The New York Times that she uses the YouTube Kids app to help her son, Isaac, learn colors and letters. But after her son became scared while watching one of the videos, she was shocked to discover that it featured some of the Paw Patrol characters dying. One was hypnotized by a doll possessed by a demon, then walked off a roof to its death. Not exactly the stuff of Saturday morning cartoons. Burns told The New York Times:

My initial response was anger. My poor little innocent boy, he’s the sweetest thing, and then there are these horrible, horrible, evil people out there that just get their kicks off of making stuff like this to torment children.

Unfortunately, the video Isaac watched is far from the only one of its kind on YouTube that can be accessed through YouTube Kids. There are tons of clips on the site with titles written in a way that can get around YouTube’s computerized, filtered curation, according to The A.V. Club.

When parents search for a word or phrase like "Paw Patrol," it can trigger YouTube’s recommended videos feature, and disturbing clips can show up in the search alongside legitimate videos parents actually want their kids to view. It's a scary loophole that experts say parents need to be aware of.

While we might just find the videos disturbing, Dr. Michael Rich — a Harvard Medical School pediatrics professor and the director of the Center on Media and Child Health — said the creepy videos can cause real distress in children. He told The New York Times:

It’s just made that much more upsetting by the fact that characters they thought they knew and trusted are behaving in these ways.

And James Bridle, a "campaigning technology-focused artist and writer," claimed that with the way the video platform’s curation works, a high number of viewers are directed to content the user created just to satisfy YouTube's algorithms as closely as the user could. That could be why something like "Paw Patrol" might show up several times in the title of one of the graphic Paw Patrol videos — to make it more likely to catch the attention of the algorithm or filter.

Bridle is also concerned about how the system could impact kids. He told The Guardian:

What we’re talking about is very young children, effectively from birth, being deliberately targeted with content which will traumatise and disturb them, via networks which are extremely vulnerable to exactly this form of abuse.

So what can parents do about the problem? Malik Ducard, YouTube’s global head of family and learning content, told the Times that parents can block channels, set usage timers, or disable search results, among other things. They also need to report inappropriate videos so someone at YouTube knows the content needs to be reviewed.

Ducard noted that in the past month, “less than .005 percent” of the millions of videos viewed in the YouTube Kids app were removed for being inappropriate. So the site does remove inappropriate content, but people have to mark it. Sometimes technology just isn't as "smart" as we would like it to be, and human intervention is necessary.

This doesn't mean parents should never, ever let their kids use tablets and services like YouTube Kids, of course. A recent study by Common Sense Media found that nearly half of kids aged 8 and younger — 42 percent — have their own tablet, according to The Boston Globe. The fact is, the accessibility to video content online isn't going away, and shielding kids from it entirely isn't really realistic.

But the next time you use YouTube or YouTube Kids to let your kid watch some Peppa Pig on their iPad, just make sure what they're watching is the real deal.