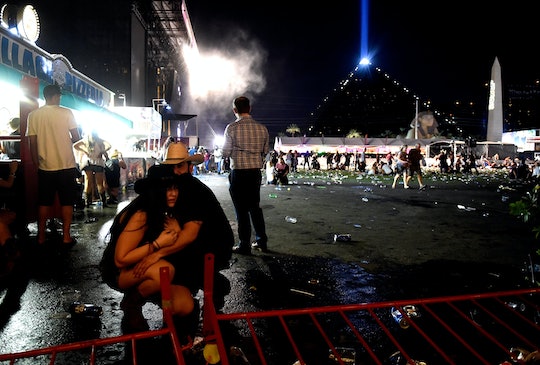 Here we go again. Not only did has Las Vegas earn the macabre, unenviable distinction of being home to the deadliest mass shooting in American history, but the heartbreaking attack is already drawing out the empty platitudes of a paralyzed Congress and other anti-gun safety politicians. After a gunman managed to murder nearly 60 people enjoying an outdoor country music festival and leave more than 500 wounded Sunday night, politicians who have proved themselves more than content to protect the gun lobby over American lives are out in force with their bland condolences for the many, many victims and their grieving friends and families. But these officials know that "thoughts and prayers" won't prevent the next shooting — just as their benign tweets and statements after other recent mass shootings did absolutely zilch to protect the victims of this latest rampage.

Las Vegas and the rest of the United States are reeling after 64-year-old Stephen Paddock allegedly bombarded the Route 91 Harvest Festival's 22,000 attendees with bullets from a nearby high-rise hotel Sunday night. The shooter was later discovered dead in his room on the 32nd floor of the Mandalay Bay Resort and Casino across the intersection, according to the Las Vegas Review-Journal, reportedly having died from a self-inflicted gunshot wound.

Yes, the immediate threat that was this particular murderer has been neutralized. But the United States is far from safe from the similar atrocities that are all but guaranteed to plague Americans moving forward — and that's largely because of Congress's abysmal track record of failing to pass meaningful gun safety legislation after this country's all-too-common mass shooting events.

What pro-gun politicians are good at, though, is transmitting their trite and tired takes offerings of thoughts, prayers, and other bland, passive statements. They did it after a gunman killed 20 first graders and six adults in a Connecticut elementary school in 2012; theu hemmed and hawed with well wishes when 49 died in a gay nightclub in Orlando after a shooter ambushed it armed with a pistol and an assault rifle.

And, from the president down, they're doing it now, as hospitals care for the wounded and authorities work to identify the dead and notify family members in Las Vegas.

Texas Sen. Ted Cruz, who has bragged about having led the opposition against gun safety legislation Democrats pushed after the Sandy Hook massacre, tweeted Monday that he was "lifting up in prayer all impacted by last night's despicable shooting." Republican California Rep. Kevin McCarthy tweeted that the whole nation was praying after the "senseless tragedy" — but once was presented with the California Rifle and Pistol Association’s Outstanding Legislator Award for his consistently pro-gun voting record. And, as expected, Republican Nevada Gov. Brian Sandoval took to Twitter to blast the shooting as both "tragic" and "heinous," without mentioning that he signed into law a measure that authorized Nevada to preempt local and county gun laws in 2015. Nevada has strikingly lax gun laws.

But this is not about exposing the hypocrisy of the conservative wing of the "thoughts and prayers" contingency. Instead, the most viable way forward is to identify ways to circumvent their ineptitude and act on them. That means identifying common sense gun safety measures that could help to reduce future loss of life — whether in the form of mass shootings or accidental shootings by children who find loaded firearms in homes — as well as urging our representatives and senators to vote against legislation that recklessly prioritizes gun manufacturers over the people whom their products kill every single day.

As Nicholas Kristof wrote for The New York Times, "We don’t need to simply acquiesce to this kind of slaughter." Fighting back against it, he argued, encompasses a whole range of safeguards lawmakers should support that very well could, in the long run, help to mitigate the horrible epidemic of gun violence. These safeguards include ensuring universal background checks on gun buyers, banning people subject to domestic violence protection orders from purchasing firearms, legally enforcing safe storage practices, limiting gun sales to those 21 and older, making serial numbers more difficult to remove, and more.

Americans who are concerned about rampant gun violence — and that should be every single one of us — can also contact their members of Congress about individual pieces of legislation. The House, for example, is getting ready to vote on a bill that would deregulate the sale of gun silencers, according to ThinkProgress. While those who advocate for easier access to devices that dramatically reduce the sound firearms make when fired maintain they want to protect gun owners' hearing, critics of the possible move argue that silencers make it harder to figure out where gunshots are coming from and to know when there is more than one shooter in a situation like the one Las Vegas confronted Sunday.

Another bill moving through Congress, the Concealed Carry Reciprocity Act of 2017, would permit gun owners to travel with their weapons among states where concealed carry is legal, according to Bustle. "Those against the bill worry that people could 'permit shop' by getting their permits in states with less restrictions, and then using their guns in states that have stricter rules for weapons (for example, some states prevent domestic abusers from receiving permits and gaining access to hand guns.)," Bustle's Marlen Komar explained.

Constituents can monitor all active legislation — gun-centric or otherwise — at govtrack.us. You can even sign up for email updates.

Another way to help to prevent mass shootings like the one in Las Vegas from happening again is to get involved with and donate to organizations dedicated to that cause. The Brady Campaign to Prevent Gun Violence, for example, aims to slash the number of gun deaths by half by 2025 by advocating for background checks, stopping the "the 5 percent of gun dealers that supply 90 percent of all crime guns," and informing people about how dangerous guns can be. And Moms Demand Action pushes for common sense solutions to violence while still supporting the Second Amendment.

The latest reports indicate that 58 people have been killed and 515 injured in Las Vegas. It's a heart-wrenching situation that possibly could have been avoided entirely if U.S. politicians had the appetite to work to eradicate gun violence. The path to actually doing that, of course, is far from cut and dry. In fact, until more information is known, it's totally possible that the above safeguards would not have prevented this tragedy. But there's one thing we absolutely do know for sure: When it comes to protecting Americans, thoughts and prayers simply won't cut it. Concrete actions, on the other hand, just might.