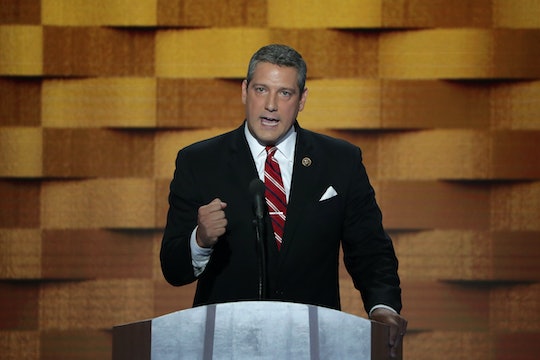 Now that politicians have begun to throw their hats into the ring to run for president in 2020, it seems fair to assume that people are going to be paying especially close attention to certain issues. Issues like abortion, which one would think might no longer be an issue at risk since it has been legal for more than 45 years, but that's not the case. As more and more states pass anti-abortion laws like the "Heartbeat Bill," women will want to know what candidates think about reproductive rights and freedoms. And, as of April 4, there's a new presidential candidate and voters may be curious about what Tim Ryan's stance on abortion has been throughout his career in politics.

Democratic Ohio Rep. Tim Ryan announced his bid to run for the presidency in 2020 moments before appearing on The View on Thursday morning, according to CBS News. On his website, Ryan explained why he wants to run for president, writing: "A quiet revolution is happening in this country. One that is driven by compassion and the independent spirit our nation is known for. It’s time for us to invest in our values so we can focus on what really matters: healing and uniting our nation."

While his focus appears to be on the economy and keeping jobs in America, there's one thing he needs to clear up: Just where does Tim Ryan sit when it comes to access to abortion?

Back in 2002, according to The Atlantic, Ryan was making a bid to run for Congress. His platform? Anti-abortion, CNN notes. After he was elected to Congress, he initially voted "with Republicans" on the issue, according to CNN

But over the years, Ryan appeared to have something of a change of heart. In fact, he was ousted from the board of Democrats for Life of America because of a bill he co-sponsored called the Preventing Unintended Pregnancies, Reducing The Need For Abortion, and Supporting Parents Act in 2009 which would fund better sex-ed and access to contraception to end unwanted pregnancies, according to Rewire News.

Still, he seemed to want to stay on board with pro-lifers. That same year he wrote an editorial doubling down on his anti-abortion stance, in which he called himself "a conscientious pro-life member of Congress." According to The Vindicator, he wrote:

On the issue of abortion, I advocate a path that would bring together all who care deeply about the issue whether they are pro-life or pro-choice. Together, we seek to reduce the number of abortions in our nation while reducing the rancor and acrimony that can too often lead to tragedy... But that does not mean my beliefs have changed... My voting record remains consistent. I have voted in favor of parental notification laws, for the Unborn Child Pain Awareness Act, against abortion in federally-funded military medical facilities, for the Unborn Victims of Violence Act, against partial-birth abortion, and against human cloning.

For reference, the Unborn Child Pain Awareness Act is a bill which would require abortion providers performing abortions after 20 weeks to inform the pregnant woman of the fetus' age and tell her that her pain medication would not be administered to the fetus. And the Unborn Victims of Violence Act of 2004 recognized a fetus as a victim of violence if they are also injured in a crime.

By 2015, apparently after spending years talking to women who had gone through unplanned and unwanted pregnancies, Ryan appeared to firmly change his mind for good. He wrote an 2015 editorial for the Akron Beacon-Journal called "Why I Changed My Mind About Abortion," and he wrote about the women who helped to change his mind:

I have come a long way since being a single, 26-year-old state senator, and I am not afraid to say that my position has evolved as my experiences have broadened, deepened and become more personal... I have come to believe that we must trust women and families — not politicians — to make the best decision for their lives.

On his website — under Protecting Reproductive Rights — Ryan notes, "while there are people of good conscience on both sides of this argument, one thing has become abundantly clear to me: the heavy hand of government must not make this decision for women and families."

There's every possibility that Ryan's change of heart was and has been genuine. That he really did speak to women and realized he no longer wanted the government to tell a woman what to do with her body. But when it comes to presidential candidates and what voters should know, his voting record certainly bears notice, too.