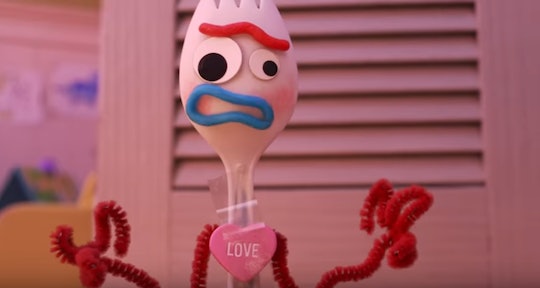 Kids hear "I love you" all the time, but have they ever asked you what that actually means? It's tough to define, but as Valentine's Day approaches, parents and kids can turn to a quirky short on Disney+ featuring several Toy Story characters trying to unpack the meaning of love for a little help. Spoiler: It's complicated.

The fifth episode of Forky Asks A Question on Disney+ attempts to answer the question "What is love?" Throughout the roughly four-minute short, Forky, voiced by Tony Hale, asks a toy elephant named Melephant Brooks (Mel Brooks), a child's chair named Chairol Burnett (Carol Burnett), and a toy rhinoceros named Carl Reineroceros (Carl Reiner) to explain love to him. (If you would like be totally surprised by what happens next, please note there are some spoilers for this episode ahead.)

The "very, very, very, very" senior toys reassure Forky that they know what they're talking about when it comes to love, with Melephant Brooks proclaiming, "I know everything there is to know about love." But when Forky asks him how to tell when you're in love, he simply responds, "No idea."

After the toys try to act out what love might be for Forky, Carl Reineroceros tells Chairol Burnett he actually loves her, much to the dismay of a new character, a tiger toy named Bitey White, voiced by Betty White.

"Just as I suspected, going behind my back, huh?" Bitey says, "I thought you were my cutesy wootsy wittle rhinoceros?"

All four toys get into a little argument and all sorts of drama ensues. But, at the end, Forky seems satisfied. "This is love? Well, count me in!"

Beyond being simply entertaining and pretty darn funny, the toys' confusion over how to answer Forky's question in the simplest terms may give kids comfort to know that even grown-up adults are mystified and confused by love.