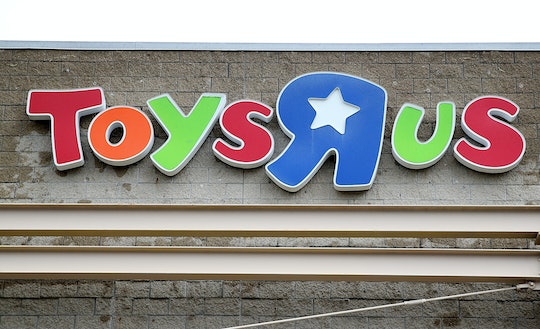 Guys, Toys "R" Us May Be Making An Exciting Comeback & Just In Time For The Holidays

Well, here's some news that both kids and adults can get excited about. Roughly eight months after the last store closed up shop, Bloomberg has reported that Toys “R” Us may be opening up again — but this time, the toy stores are reportedly going to be much smaller than what shoppers were used to and may also be focused on playful experiences for your kiddos. And it sounds like it could be a reality just in time for the 2019 holidays.

On June 21, Bloomberg reported that Richard Berry — who was Toys "R" Us' global chief merchandising officer and now serves as president and CEO of Tru Kids Inc., according to USA Today — has been shopping this idea for smaller, more intimate toy buying retail outlets for some time. Details are very scarce and not confirmed at this point, but according to Bloomberg's report, the new rumored Toys "R" Us stores "are slated to be about 10,000-square feet, roughly a third of the size of the brand’s big-box outlets that closed last year" and "the locations will also have more experiences, like play areas." Additionally, according to io9, the smaller stores and fun experiences "would be joined by a website selling its goods."

In response to Bloomberg's report, a spokesperson for Tru Kids Brands did not confirm or deny the rumored plans, but told Romper in a brief statement: "We aren’t in a position to publicly share details on our US strategy at this time."

Tru Kids Inc. won the rights to the brand for Toys “R” Us last October, according to CNN, together with several other brands like Babies “R” Us and Geoffrey the Giraffe. An unnamed source who was reportedly "familiar" with Berry's plans told the outlet at the time, “We’re definitely coming back in 2019. At minimum two stores. There’s more planned for 2020." According to CNN, the source also called the new stores "experiential," which seems to line up closely with Bloomberg's report.

In fact, earlier this year, Berry even released a statement discussing plans for the brand, saying his team was focused on a bringing the beloved stores back in a "completely new and reimagined way." The February statement said:

We have a once-in-a-lifetime opportunity to write the next chapter of Toys "R" Us by launching a newly imagined omni channel retail experience for our beloved brands here in the U.S... We have an incredible team focused on bringing Toys "R" Us and Babies "R" Us back in a completely new and reimagined way, so the U.S. doesn’t have to go through another holiday without these beloved brands.

As io9 pointed out, there are some hurdles to be faced with the latest rumored idea, perhaps most obviously getting toy manufacturers to accept the new model as well as getting the necessary support from investors.

However, if the company does end up delivering on these rumored and exciting plans, it sounds like there should be some new toy stores focused on playful experiences opening just in time for the holidays.

More Like This
Shiloh Jolie-Pitt Shows Off Her Impressive Dance Moves In Viral Video
There's Now A Tampon Shortage... Because Baby Formula Wasn't Stressful Enough
10 Of The Raddest Movies From The '90s To Watch On Girls Night
Marcel The Shell Is Officially A Movie Star