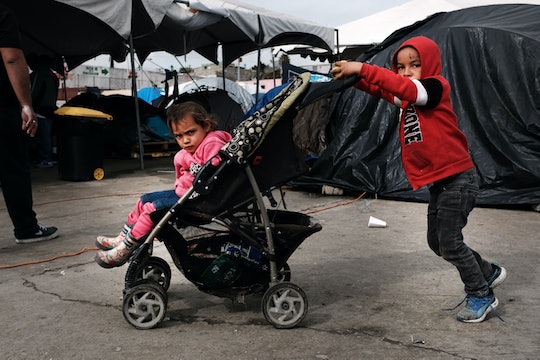 When thousands of migrant children were separated from their families at the border, there was an implicit understanding that they would eventually be returned to their parents. But months later, the Trump administration said reuniting immigrant kids with their parents "could be traumatic." Along with admitting that a lot more children were separated from their parents than previously believed, according to the Associated Press, the Trump administration said in a statement that it would "require extraordinary effort" to do so.

Following the Trump administration's implementation of its "zero-tolerance" policy on people crossing the border illegally, thousands of children were taken away from their parents and placed into detention centers, and later with "sponsor families," according to The Guardian. These separations were conducted without any government mechanisms or plans in place to reunite families once they are released from custody, as The New Yorker reported.

And while Trump signed an executive order on June 30 reversing his zero-tolerance immigration enforcement policy, family separations continued, according to USA Today. Several days before Trump signed the order, a federal judge in San Diego ruled that all families needed to be reunited within a 30-day period. Suffice it to say, this has not been the case.

Months later, thousands of children remain separated from their parents and the Trump administration appears to be comfortable with keeping it that way, as the American Civil Liberties Union has argued.

Jonathan White, who leads the Health and Human Services Department’s efforts to reunite migrant children with their parents, reportedly said in a court filing that removing children from the sponsor homes that they were placed in — with the goal of rejoining their parents — “would present grave child welfare concerns," according to the Associated Press. Instead, White believes that the government should focus on the children in government custody, leaving the others with sponsors. “It would destabilize the permanency of their existing home environment, and could be traumatic to the children,” White said, according to Newsweek.

The outline of the administration's position is a court-ordered response to a government watchdog report filed last month, according to The Hill. The watchdog group found that the number of children split from their families is likely much higher than previously reported, as The Hill reported, meaning not only did the government not have proper mechanisms in place to reunite families, but it was also not properly tracking the separations.

The ACLU is calling for U.S. District Judge Dana Sabraw’s reunion order to apply to the children who were released to sponsor families prior to his June 26 ruling, as Newsweek reported. As it stands, these children are exempt from the order and can be left in the care of their sponsors as White has suggested. Lee Gelernt, the lead ACLU attorney, said that the Trump administration's response makes it clear that it "doesn’t even think it’s worth the time to locate each of them," as he stated on Twitter.

A hearing on including the currently exempt children is scheduled for Feb. 21, according to The New York Times.

The American Psychological Association wrote an open letter to President Donald Trump that denounced the practice of separating families, imploring him to “commit to the more humane practice of housing families together pending immigration proceedings to protect them from further trauma,” as Fortune reported. Additionally, the letter described the conditions of family separation as a “mental health crisis." Stress and emotional trauma were listed as impacts:

Sudden and unexpected family separation, such as separating families at the border, can add to that stress, leading to emotional trauma in children. Research also suggests that the longer that parents and children are separated, the greater the reported symptoms of anxiety and depression are for children.

Where the government is failing to reunite thousands of children with their families, NGOS are scrambling to meet the need that is left, helping in any way they can, according to Vice. Megan McKenna of Kids in Need of Defense (KIND), which is working with a children’s shelter in Seattle to reunite families, told Vice that the biggest challenge comes when the organizations try to find the parents. Some have already been deported, leaving no plan behind for their children, as McKenna told Vice:

While family separation had been happening before the zero tolerance policy, it had not been happening at the scale which is it now ... We don’t know what the parent’s wishes are for the child in their immigration case. Do they want they child to be deported? Do they want the child to try to go through the U.S. immigration policy alone and apply for asylum? It’s a slow process. It’s all new.

The fact that the U.S. government not only separated children from the arms of their parents, going so far as to tear a nursing baby from its mother, as HuffPost reported, but also had no plans or tools in place to reunite those families is appalling. As "difficult" as it may be logistically to locate parents and support the needs of their children adjusting to life with their families again, there is no way it is as difficult as the unnecessary hardship that these children and their parents have been through.