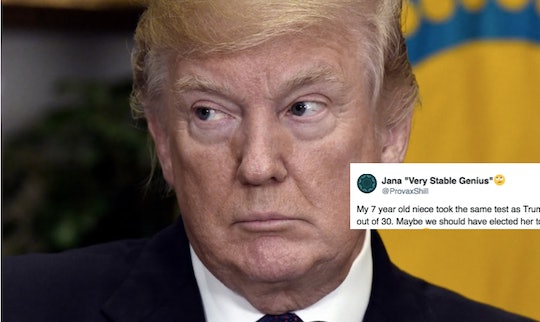 Recently, President Donald Trump reportedly underwent his first yearly physical exam administered by the presidential physician. Perhaps due to the large number of people who have questioned his mental fitness in recent months, Trump reportedly asked for his cognitive functioning to be tested, according to Reuters. As such, his physician administered the Montreal Cognitive Assessment, which Trump received a 30 out of 30 on. Soon after, in an interview with Reuters, Trump bragged about scoring "the highest on tests" and hinted that perhaps past presidents had left the North Korea crisis to him since he was — clearly, judging by his test score — the most cognitively fit president in recent history.

The thing is, though, the Montreal Cognitive Assessment is a quick assessment tool for detecting mild cognitive dysfunction, according to CNN, and a 30 out of 30 score is a far cry from being an indicator of genius. Instead, it proves that the president can solve very basic logic problems, identify routine animals, and do basic subtraction. It's the sort of thing that most schoolchildren would be able to do. If you'd like to give it a try for yourself, BuzzFeed created a pretty good approximation of the Montreal Cognitive Assessment for the public to take.

Yet, when discussing his presidential predecessors' inability to solve the ongoing crisis with North Korea on Wednesday, he bragged about the perfect score he'd received on the MCA the day before. "I guess they all realized they were going to have to leave it to a president that scored the highest on tests," he told Reuters of presidents who held the Oval Office before him, such as Bill Clinton, George W. Bush, and Barack Obama.

Was the president joking? There's no indication of humor in the Reuters piece, but some are really hoping he was. Romper reached out to the White House for comment on the remark, but did not receive an immediate response. Either way, the public is taking the opportunity to roast Trump spectacularly on Twitter:

Trump's insistence on taking the Montreal Cognitive Assessment came just days after a group of over 70 health professionals sent Trump's physician a letter asking him to carry out basic mental health tests on Trump, according to Politico. The group argued that patients over age 66 who receive Medicare receive an annual check-in on their neurological, mental, and cognitive fitness. At 71 years old, they argued, Trump should undergo the same testing.

"Without this evaluation, the American people will not have a clear understanding about the health and well-being of the President, which is essential for Americans to know of any president," they wrote in the letter. They highlighted concerns over the president's "episodes of slurred speech," "frequent repetition of the same concepts," and "declining faculties for complex thought, rambling speech, difficulty completing a thought."

After carrying out the annual physical exam (with the MCA thrown in), however, Trump's doctor — Dr. Ronny Jackson — said the president was in great health, according to CNN.

In a series of tweets on Jan. 6, the president made it clear that, regardless of calls from the public for mental health testing, he thought he was doing quite well when it came to both mental health and intellect.

"Throughout my life, my two greatest assets have been mental stability and being, like, really smart," he tweeted. He continued:

I went from VERY successful businessman, to top T.V. Star to President of the United States (on my first try). I think that would qualify as not smart, but genius....and a very stable genius at that!

Maybe Trump was joking about scoring "the highest on tests." Perhaps he wasn't tweeting seriously when he bragged that he was "a very stable genius." But in the meantime, the American people seem just slightly concerned that the president believes a very basic screening for cognitive decline would qualify him to solve an international crisis.