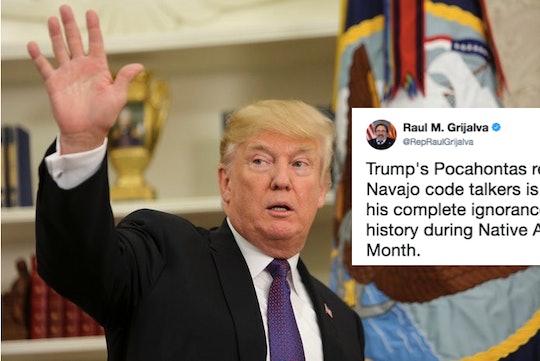 President Donald Trump and his supporters often take pride in his ability to "go off script" and speak his mind, but on Monday afternoon, he really outdid himself by calling Massachusetts Sen. Elizabeth Warren "Pocahontas" in front of a group of Navajo "code talkers." Twitter's reaction to Trump's "Pocahontas" joke sum up why exactly this "joke" is just so wrong on about, oh, tens of hundreds of levels.

Romper has reached out to the White House for comment and is awaiting a response.

The "code talkers" are Native Americans who fought in World War II. Native Americans were enlisted as far back as World War I, when members of the Choctaw Tribe transmitted messages in their native language on the battlefield so that the Central Powers couldn't decode them. In World War II, the Marine Corps began recruiting from the Navajo Tribe to do the very same thing. There were 29 of them in all who developed a code using their tribal language in the name of assisting troops on the battlefield without being intercepted, according to ABC News.

It's such a fascinating nugget of American history, and the event, which was being held in conjunction with Native American Heritage Month, should have been a no-brainer for the president to show his respect for the Native American community and honor their service. Alas, tact and empathy are two things the president seems to be severely lacking.

Instead, he stood in front of a portrait of President Andrew Jackson, which was terribly bad optics, since Jackson signed the "Indian Removal Act" way back in 1830. Then Trump managed to use the word "Pocahontas," which is a racial slur, to insult a Congresswoman who has nothing to do with the code talkers or honoring the attendees as this particular event.

"I just want to thank you because you are very, very special people. You were here long before any of us were here," Trump said at the event, according to videos shared on Twitter. "Although, we have a representative in Congress who has been here a long time ... longer than you — they call her Pocahontas!"

The White House Says It's Not A Racial Slur

But Really, Most People Weren't Surprised

Others Were Just Shocked At *Everything*

Especially That It Was In Front Of Vets

There are a few troubling things about his statement, as the Twitter responses show. The main issue is that Trump decided to bully a political enemy in front of veterans using a racial slur. And he doesn't even consider it a racial slur, despite the fact that it is, which is even more terrifying. Yet he uses it all the time when he bullies Warren on social media and in speeches. Once, he said at a campaign rally in 2016, according to Vox:

His Use Of Racial Slurs Is Getting Out Of Hand, Some Think

Trump calls her this because Warren once claimed that she had Cherokee family members, although her Native American Heritage has remained controversial and undocumented, as The Washington Post reported. Warren's genealogy aside, Trump's continued use of the nickname is offensive, no matter what you think about her politics. It was neither the time or place to get into his feud with Warren — again. It was a day honor Native American World War II veterans.

Rather than make a unifying statement about the legacy of Native Americans throughout America's history and address the Jackson portrait and the habit of Americans to whitewash Native American history, like any other normal politician would do, Trump decided to use a racial slur to attack a woman he doesn't like. Yet again.

John Norwood, general secretary of the Alliance of Colonial Era Tribes, told NBC News that Trump's use of the nickname "smacks of racism."

"The reference is using a historic American Indian figure as a derogatory insult and that’s insulting to all American Indians," he told the outlet. Norwood added that Trump needs to "stop using our historical people of significance as a racial slur against one of his opponents."

It's really a shame that the POTUS makes headlines like these a reality and it's troubling that it doesn't appear that those in his ear are making an effort to put an end to it. The more people that let it slide, the more normal his brand of bigotry becomes. And that's not a good look on any day, let alone on one intended to honor World War II veterans.