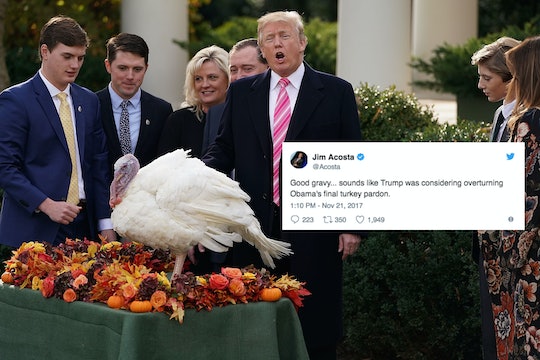 On Tuesday, President Donald Trump followed presidential tradition and "pardoned" turkeys ahead of the Thanksgiving holiday, showing mercy to Drumstick and Wishbone in the Rose Garden of the White House. When Trump pardoned two turkeys this year, he made some really weird comments, so of course Twitter was ready to provide its hilarious commentary. To be fair, some of the comments Trump made were just begging for some sort of hilarious reaction, but a few of the responses on Twitter also got a little bit serious about the current state of the presidency and Trump's own past actions as a businessman.

First lady Melania Trump and their son, Barron, joined Trump for the event, according to NBC News. At the pardoning, Trump made a few jokes about the animals that were spared this year, saying he is "pleased to report that unlike millions of other turkeys at this time of year, Drumstick has a very bright future ahead of him." That's a bit of a dark joke to make right before a holiday, but maybe dark comedies are Trump's thing.

Trump acknowledged during the event that he's been "very active" in overturning policies from Obama's presidency. According to The Hill, Trump said:

As many of you know, I've been very active in overturning a number of executive actions by my predecessor. However, I have been informed by the White House counsel's office that Tater and Tot's pardons cannot, under any circumstances, be revoked. So we're not going to revoke them. So Tater and Tot: You can rest easy.

Trump clearly expected laughs for that one, though it's a little troubling that he basically admitted through the joke that he has, in fact, been working to specifically overturn policies Obama enacted during his presidency, as many critics have suspected.

As with everything else Trump does, his comments during the pardoning resulted in some pretty funny reactions on Twitter. Some joked about the legal trouble members of his family may be in as the Mueller investigation continues.

Others made fun of Trump's tendency to boast and ramble about himself and his accomplishments:

Earlier this month, Trump helped secure the release of three UCLA basketball players from jail in China. Which is very commendable, of course. But afterwards, Trump said the players didn't properly thank him for his help. So Twitter wondered if Trump would throw a fit if the pardoned turkeys also didn't show him enough gratitude for helping them.

Trump tweeted on Sunday that the father of one of the players was “unaccepting” of what he did, and then Trump said he should have left the men in jail. The whole incident really was not funny at all, but at least Twitter can make the most of the situation.

Others noted a strange comment Trump made about one of the turkeys at the event. He reportedly asked, "Can I touch it?", then did so when given permission. Twitter thought this was entertaining, given Trump's well-known history of making jokes about grabbing women without their consent.

But other comments about the event were much more light-hearted. The turkey pardon is a rather silly tradition that presidents have taken part in for many administrations, according to the White House Historical Association. I personally look forward to it every year.

But I had no idea that I should also expect such epic responses to the turkey pardon from Twitter this year. As always, the social media platform and its users did not disappoint when it came to offering up some pretty hilarious responses to something odd that Trump did. They're clearly not about to take a break just because it's the holiday season.