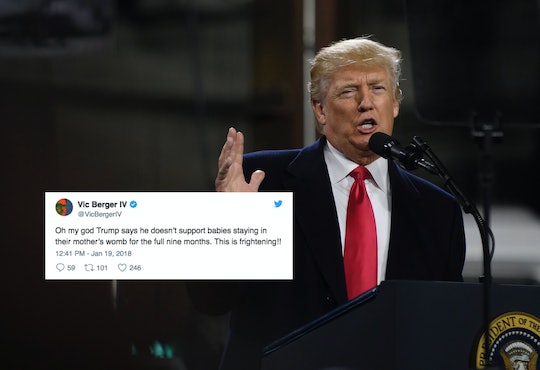 Trump Says It’s Wrong Babies Are Being Born “In The Ninth Month,” & Twitter Is Confused AF

President Donald Trump spoke at the 45th annual March for Life on Friday, but some of the remarks he made about birth and abortion are a little confusing, to say the least. According to video of Trump's remarks for the event, Trump said it's wrong that babies are being born "in the ninth month," and obviously, people are a little confused by such a statement. Because... aren't the vast majority of babies born "in the ninth month"?

During his March for Life speech, President Trump reportedly said, according to The Daily Beast:

Right now, a number of state laws allow a baby to be born from his or her mother’s womb in the ninth month. It is wrong. It has to change.

But clearly, it's not "wrong" that a baby be born after nine months or so of pregnancy, since that's generally how it works, if it all goes smoothly.

The White House did not immediately respond to Romper's request for comment on Trump's statements at the March for Life on Friday.

Trump supposedly meant to say that a baby can be "torn from his or her mother's womb in the ninth month," according to at least one Breitbart writer. But of course, that's not true either — if Trump was talking about abortion, fewer than 2 percent of all abortions in the United States are even performed after the second trimester, according to The Washington Post.

Information from the Guttmacher Institute, a research and policy organization "committed to advancing sexual and reproductive health and rights in the United States and globally," backs that fact up. The Institute reported that 43 states have "gestational limits" when it comes to abortion, prohibiting them entirely after a certain point in a pregnancy, except when necessary to protect a woman’s life or health.

Data from the Centers for Disease Control and Prevention concurred with those findings. For instance, in 2012, 91 percent of abortions in the U.S. occurred before the pregnancy reached 13 weeks. Fewer than 1.3 percent happened after 21 weeks, or late in the second trimester, the CDC and The Washington Post reported. Abortions performed at the end of the second trimester — but still nowhere near the ninth month of gestation — are extremely rare and are often the result of concerns like severe birth defects.

In fact, Dr. Jen Gunter, a San Francisco obstetrician and gynecologist, once wrote in a blog post:

After 24 weeks birth defects that lead to abortion are very severe and typically considered incompatible with life.

In a presidential debate back in 2016, Trump claimed that under current abortion law, “You can take the baby and rip the baby out of the womb in the ninth month, on the final day," according to The New York Times. But doctors at the time said that sort of assertion is "absurd." Dr. Aaron B. Caughey, chairman of obstetrics and gynecology at Oregon Health and Science University, told The New York Times:

That is not happening in the United States.

It is, of course, such an absurd thing to say. I’m unaware of anyone that’s terminating a pregnancy a few days prior to delivery of a normal pregnancy.

But regardless of any sort of fabrications about abortion Trump may try to spread, the statement he made on Friday just didn't make any sense. At least one source has stated what he meant to say, but what he actually said was completely confusing and weird.

And of course, Twitter was not about to let this one go. "Is trump extending a baby's lease in the womb?" one Twitter user asked.

Frankly, everyone on social media was really, really confused by Trump's comments at the March for Life. I mean, this wasn't an offhand comment to a staffer, or something overheard by a journalist who snapped up the scoop for a story. Trump was on camera, and said it's "wrong" for a baby to be born in a woman's ninth month of pregnancy. What's hilarious about the comment, though, is that the language is actually more accurate than what he perhaps meant to say: if a baby is delivered in the ninth month, or a few weeks early, that is called birth or delivery — not abortion. Because abortions in the ninth month just don't happen.

It's definitely going to be interesting to see the White House try to explain this one. But by the time the spin starts, it might not matter — Twitter already took Trump's comments and ran with them. And as we all know, the internet is forever.