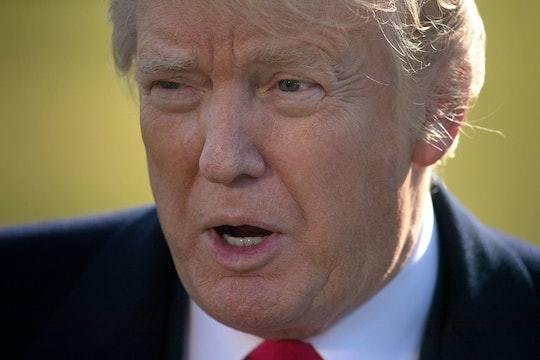 On Wednesday, news broke that former White House chief strategist Steve Bannon reportedly called a Trump Tower meeting with Russian operatives "treasonous" in an explosive new book about the Trump administration. The revelation put the White House on the defensive, quickly issuing a statement in which President Donald Trump said Steven Bannon "lost his mind." But where Trump and his aides see a valid defense in fact lies a problematic slur against people with mental illnesses.

The White House released a 266-word rebuttal shortly after the initial story about Bannon's comments in Michael Wolff's upcoming book, Fire and Fury: Inside the Trump White House, was published by The Guardian, according to CNN. In the statement, Trump claimed that, now that his former aide is "on his own," he is "learning that winning isn't as easy" as *cough* the president makes it look.

Trump said in the White House statement, according to CNN,

Steve Bannon has nothing to do with me or my Presidency. When he was fired, he not only lost his job, he lost his mind. Steve was a staffer who worked for me after I had already won the nomination by defeating 17 candidates, often described as the most talented field ever assembled in the Republican party.

It's not surprising that Trump would use a slur against people with mental illnesses to rebuke statements made by his former right-hand man over Donald Trump Jr., former campaign chairman Paul Manafort, and Jared Kushner's meeting with Russian operatives at Trump Tower in 2016. After all, he and his administration are not above invoking mental health ableism to shut down the president's opponents. In July, for example, Trump attacked Mika Brzezinski and Joe Scarborough's mental health on Twitter after the hosts of MSNBC's Morning Joe criticized him, according to the Mighty. The president also has a long history, according to ABC News, of using "crazy" and other problematic slurs against women in general.

On the other hand, Trump's critics also have a history of using abelist terms when lambasting the president or his supporters. At one point, #DiagnoseTrump became a trending topic on social media, with opponents playing armchair psychiatrist over Trump's mental well-being. In either case, though, using mental health to cut down, discount, or dismiss someone you don't agree with only serves to further stigmatize people living with mental illnesses.

The fact is, neither is the case. People living mental illness are over 10 times more likely to the victim of a violent act, according to the U.S. Department of Health and Human Services. On top of that, upwards of 95 percent of violent crimes do not involve mental illnesses, DHHS estimated.

Not only that, but awful, inappropriate, or hurtful actions are not indicative of mental illness, full stop. As Allen Frances, a professor emeritus of psychiatry and behavioral sciences at Duke University Medical College, wrote in a letter to The New York Times, in particular to diagnosing Trump's mental state,

Bad behavior is rarely a sign of mental illness, and the mentally ill behave badly only rarely. Psychiatric name-calling is a misguided way of countering Mr. Trump’s attack on democracy.

Using ableist language to attack your detractors reinforces stigma, trivializes mental health concerns, and permits discrimination against people living with mental illness. Trump saying that Bannon had "lost his mind," is not only insensitive and crass, but it's also cruel to people who have to deal with that stigma every day.