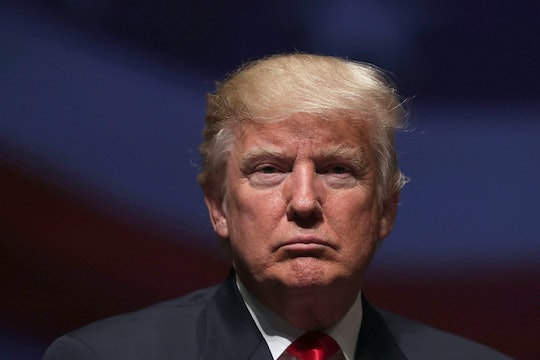 Trump Tweeted About The Wrong Shooting, & People Are So Pissed

Only a week has passed since the mass shooting in Sutherland Springs, Texas, but yet another gunman decided to open fire in a rural California town on Tuesday. The shooter went on a fatal rampage through Rancho Tehama, and at one point terrorized a local elementary school during the 45-minute attack, according to the Los Angeles Times. Condolences began pouring in on social media, including a particularly egregious post from President Donald Trump. Why egregious? Because Trump tweeted about the wrong shooting. People, of course, are angry — and rightfully so.

The deadly shooting spree began Tuesday morning when the gunman killed two neighbors he allegedly had a feud with, the Los Angeles Times reported. Authorities told reporters that the shooter then went on a rampage through Rancho Tehama while driving a stolen Ford pickup truck. He chose his victims at random, officials said; in total, the mass shooting left 10 people wounded and five dead, including the gunman, according to the Los Angeles Times.

Remember that the fatal attack happened in California — because President Trump didn't. Hours after the shooting, he tweeted,

May God be with the people Sutherland Springs, Texas. The FBI and Law Enforcement has arrived.

That didn't go over well.

People quickly took to Twitter to skewer Trump for mentioning the wrong city, where another deadly mass shooting took place not long ago. Last Sunday, a masked gunman opened fire on Baptist churchgoers in Sutherland Springs, Texas, killing 26 people and himself, according to CNN. Authorities considered the bloody incident one of the deadliest mass shootings in Texas history, and among the top five in the United States.

The president eventually deleted his tweet, but not until around eight hours had passed, according to HuffPost. The damage, however, was already done. Trump's response to the fatal 45-minute attack in Rancho Tehama, California shows where America is as a country when it comes to the frequency of mass shootings. They occur so often, now, that the president of the United States can't remember which shooting spree happened in what location.

What's even worse than a name mix-up? The possibility that Trump has a social media template for mass shootings — a charge some people had made in their criticisms on Twitter. And, to be honest, it's hard to process the sheer enormity of the possibility that the leader of the supposed free world has a boilerplate tweet for deadly shooting rampages.

In October, a month before the events in Sutherland Springs, Texas, a gunman opened fire on a country music festival in Las Vegas. The shooter killed 59 people and injured more than 500 concert goers, making it the deadliest mass shooting since the Pulse Nightclub massacre in 2016.

According to Business Insider, the fatal attack in Sutherland Springs was the 307th mass shooting in the United States this year. The rampage in Rancho Tehama would be number 308. (Just a reminder: There are only 365 days in a year.)

And with those 308 mass shootings comes hundreds upon hundreds of fatalities. Hundreds upon hundreds of lives lost because of weak public policy. Lawmakers offering their "thoughts and prayers" — particularly to victims of a church massacre — is insulting enough. But for the president of the United States to possibly have a boilerplate response to a mass shooting — one that he can't even get right — is a whole other level of insensitive, inconsiderate, and appalling. No one, not even Trump, should copy and paste their condolences.

But if he must, then he could have taken the second to proofread. The hundreds of people killed so far this year deserve at least that.