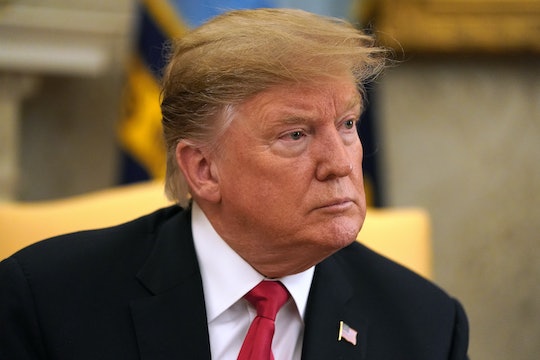 If you've even glanced at news headlines over the past week, then you've likely seen former Vice President Joe Biden's name more than once. That's because Lucy Flores — a former Nevada Democratic assemblywoman — recently claimed Biden kissed the back of her head at a campaign event in 2014. Biden has denied having knowingly acted in an inappropriate manner. But honestly, Trump's comment about the Joe Biden inappropriate touching allegations is so cringey. Romper has reached out to the White House, as well as Biden's reps, for comment, but did not immediately hear back.

On Tuesday, April 2, President Donald Trump mocked Biden during a speech at the National Republican Congressional Committee’s annual spring dinner, according to the New York Post. "I was going to call him, I don’t know him well," Trump told the crowd. "I was going to say, 'Welcome to the world, Joe, you having a good time?'" Later on in his speech, the POTUS again referred to Biden, according to the publication. Trump was describing a time when he wanted to kiss a general who had reported good news about the military campaign against ISIS. "I said, 'General, come here, give me a kiss,' I felt like Joe Biden, but I meant it," he said.

Another person pointed out, "This was the point at which, historians would later conclude, the concept of irony ceased to have any meaning whatsoever."

As NPR reported, Biden released a statement on March 31 denying any wrongdoing. "In many years on the campaign trail and in public life, I have offered countless handshakes, hugs, expressions of affection, support and comfort. And not once — never — did I believe I acted inappropriately. If it is suggested I did so, I will listen respectfully," the statement, released by Biden's spokesperson via Twitter, read.

These remarks were in response to an essay Lucy Flores wrote about her encounter with Biden for The Cut. "As I was taking deep breaths and preparing myself to make my case to the crowd, I felt two hands on my shoulders. I froze. 'Why is the vice-president of the United States touching me?'" Flores recounted. "I felt him get closer to me from behind." She continued:

He leaned further in and inhaled my hair. I was mortified. I thought to myself, 'I didn’t wash my hair today and the vice-president of the United States is smelling it. And also, what in the actual f*ck? Why is the vice-president of the United States smelling my hair?' He proceeded to plant a big slow kiss on the back of my head. My brain couldn’t process what was happening. I was embarrassed. I was shocked. I was confused.

According to The New York Times, two more women have since come forward with stories of how the former VP made them feel uncomfortable.

On Wednesday, April 3, Biden released a 2-minute video on Twitter, promising to change his actions moving forward, according to The Washington Post. "I want to talk about gestures of support that I’ve made to women and some men that have made them uncomfortable," he said, according to the publication. "I’ve always tried to make a human connection that’s my responsibility, I think ... it’s the way I’ve always been, it’s the way I try to show I care about them and listening."

The boundaries of protecting personal space have been reset. I get it, I get it, I hear what they’re saying and I understand it.

Personally, I'm at a loss for words when it comes to Trump's comments about Biden. I truly feel for these women if the stories involving Biden are true. But considering there are 23 women who have accused Trump of sexual misconduct (he denies the accusations, per Business Insider) — and considering his infamous "grab 'em by the p*ssy" comments – Trump mocking Biden seems a lot like the pot calling the kettle black.