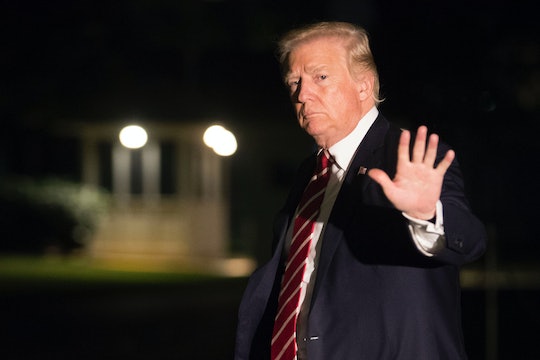 Never take President Donald Trump at his word. That's what Democrats and about 800,000 young people brought to the United States illegally as children learned (again) when the White House released its requirements for immigration reform Sunday. In September, Democratic leaders believed they had secured a deal with Trump to protect the legal status of the so-called DREAMers, who were granted temporary legal status under the Obama-era Deferred Action for Childhood Arrivals (DACA) executive order, in exchange for enhanced border security measures. The president then announced his administration was ending the program. Now, Trump's DACA demands could make it impossible to pass any deal that would protect DREAMers, leaving their futures in limbo yet again.

Let's back up. The notoriously anti-immigration Trump abruptly announced that he was ending the DACA program with a six-month delay for Congress to reach a legislative fix last month. That means that, come March, the country's hundreds of thousands of DACA recipients will lose the right to work legally and to live without fear of deportation that registering with the government had afforded them if Congress doesn't agree on a way to stop that from happening. But the huge list of anti-immigration measures that Trump wants in exchange shows that he's not all that dedicated to helping out these longtime U.S. residents who are Americans in every way, except on paper.

Michael D. Shear, a reporter for The New York Times, summed up the brand-new measures Trump wants in exchange for shielding the DREAMers as "a Christmas-in-October wish list for immigration hard-liners inside the White House," and the description couldn't be more apt. The demands include discontinuing the practice of allowing people who live in the United States to sponsor relatives to come here, implementing an "E-Verify" program that would make it impossible for immigrants here illegally to work, and expedite deportation processes by no longer allowing immigrants here illegally to claim asylum. Trump also reportedly wants to severely curtail the ability of unaccompanied minors — many sent from countries like Guatemala, El Salvador, and Honduras to escape gang-related violence and other hardships — to cross the border into the United States.

There's more, of course, but the aspect that's most egregious to Democrats is the request for funding to finally construct Trump's promised wall along the southern border with Mexico expressly to keep immigrants out. Trump launched his presidential bid by calling for the wall, and has both pushed the idea as well as shied away from any real confrontation with Congress to secure the money for it since becoming president. It's no secret, though, that Democrats (and most mainstream Republicans) in Congress are loath to allocate any money to the wall.

So, it's fair to conclude that Trump and his people know that, too. From the outside looking in, it seems as though they were never sincere in the wish to seriously work toward a fair solution to help the DREAMers. That's certainly what Senate Minority Leader Chuck Schumer and House Minority Leader Nancy Perlosi seem to think. After these top Democrats met with Trump at the White House last month and reportedly reached an agreement with him that DACA legislation would not include the border wall, they released a joint statement Monday blasting the president for going back on his word.

Here's what they had to say in part, according to CNBC:

The Administration can't be serious about compromise or helping the Dreamers if they begin with a list that is anathema to the Dreamers, to the immigrant community and to the vast majority of Americans. ... We told the President at our meeting that we were open to reasonable border security measures alongside the DREAM Act, but this list goes so far beyond what is reasonable. This proposal fails to represent any attempt at compromise.

White House officials who spoke with reporters via conference would not reveal whether Trump is willing to negotiate on these demands and whether he would veto any legislation that does not include all of the demands that could hypothetically land on his desk, ABC News reported. But all signs suggest that the bipartisan deal that Schumer and Pelosi had so victoriously reported to have struck with the unpredictable president has fallen through. MSNBC Senior National Correspondent Chris Jansing tweeted Sunday night, for example, that "Schumer and Pelosi are a no" on moving forward with any deal that includes the wall.

Trump's decision to end the DACA program turned the lives of so many young people upside down. The move to disingenuously claim to agree to a reasonable deal with Schumer and Pelosi to protect DREAMers last month may have instilled some of them with a faint and desperate hope. With his new demands, though, he has shown that he never regarded these 800,000 DACA recipients as anything other than a bargaining chip. And now, once again, their livelihoods are on the line — and the outlook looks bleaker than ever before.