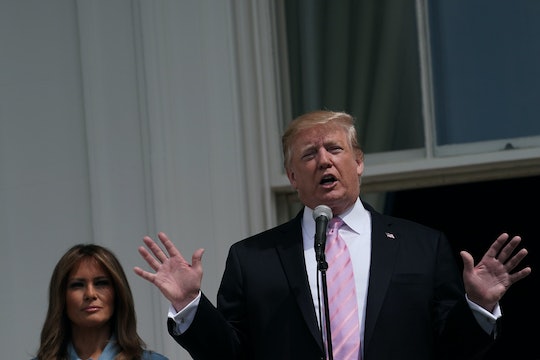 On Monday, April 22, citizens from around the world recognized Earth Day. It's a day dedicated to spreading awareness about protecting the environment, preserving our natural resources, and making concrete changes to save our planet has been a tradition since 1970. Even President Donald Trump got in on the action. (Well, kind of.) Because Trump's Earth Day message completely ignores climate change, according to The Guardian. So Twitter quickly reminded him.

A message from Trump on Earth Day was in stark contrast to that of his predecessor in the sense that it completely left out one of the greatest threats of our time: Climate change. Which is sort of a big deal. Interestingly, on a day dedicated to preserving our planet, Trump decided to instead write his praises of capitalism and our booming economy.

The proclamation started off "well" in the sense that it included all of the right things. "Earth Day is a celebration of the abundant beauty and life-sustaining bounty of our natural environment. On this day, we reaffirm our responsibility to protect God’s wondrous creation for future generations," Trump wrote. "From the Appalachian Mountains to the golden shores of California, America is blessed with some of the most beautiful scenery on Earth. As Americans, we all share an immense pride in these God-given treasures and a tremendous appreciation for our abundance of natural resources."

But then it just... missed the point entirely.

Environmental protection and economic prosperity go hand in hand. A strong market economy is essential to protecting our critical natural resources and fostering a legacy of conservation. My Administration is committed to being effective stewards of our environment while encouraging opportunities for American workers and their families.

Trump went out to tout "historic economic and job growth," along with high-quality water and air during his presidency. He also claims to have "expanded support for conservation of land, water, and wildlife." (Wait, what?!)

Anyone who has been following the Trump administration in the slightest is probably rolling on the floor laughing at this point. If you need at least 15 reasons why Trump's Earth Day message is complete BS, just check out National Geographic's list of ways Trump has impacted the environment. Because none of it is good. (Backing out of the Paris Climate Agreement, rolling back the Obama-era Clean Power Plan, and the EPA loosening regulations on toxic air pollution, just to name a few.) Then again, this is the same president who recently claimed, "They say the noise causes cancer," when talking about windmills. (Spoiler alert: They don't.) So go figure.

Twitter didn't waste any time calling out President Trump for his hypocrisy. One person wrote, "The only truthful phrase in this entire, tangled conglomeration of words is 'Earth Day.'"

Back in 2016, President Barack Obama's Earth Day message couldn't have been more different. "Just as the people who came together on Earth Day in 1970 embraced their responsibility to preserve our planet, today we face a threat that also requires collective action," Obama wrote. "Human activity is disrupting the climate, and the challenge of combating climate change is one that will define the contours of our time." He continued:

The effects of climate change are already evident in stronger storms, deeper droughts, more rapidly eroding soil, and longer wildfire seasons — and as of last year, 14 of the 15 warmest years on record have occurred since 2000. This urgent threat will worsen with each passing year unless we act now.

The comparison makes Trump's Earth Day message seem even worse somehow, doesn't it? Our planet might be doomed if we don't get our sh*t together by 2030. But hey, at least the economy is decent.