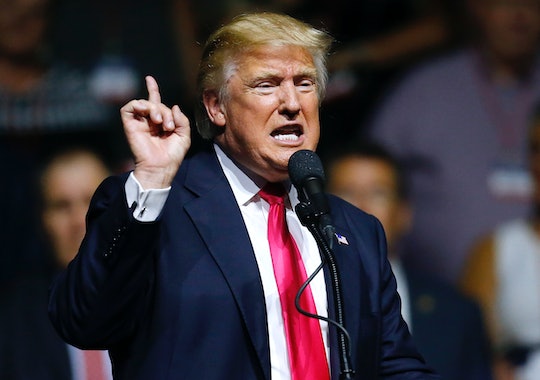 On Friday afternoon, Nykea Aldridge, the cousin of NBA star Dwyane Wade was killed in Chicago while pushing a stroller. She was caught in random gunfire in Parkway Gardens and pronounced dead when she arrived at the hospital. Her child was not injured. After Wade tweeted about her death, there was an outpouring of support for his family. But it was Donald Trump's response to the death of Dwyane Wade's cousin that had everyone really talking, mainly because i totally missed the point when it comes to gun violence and the affects it has on everyday families.

The Republican nominee for president tweeted on Saturday morning, "Dwyane Wade's cousin was just shot and killed walking her baby in Chicago. Just what I have been saying. African-Americans will VOTE TRUMP!" There are a few reasons why the tweet struck many people the wrong way, and it wasn't just because he deleted the first one after misspelling Wade's name, or that he didn't qualify that "just" with actual facts about the shooting (it happened a day before the tweet, so it wasn't like he was responding to breaking news).

It felt insensitive to many who read it since instead of commenting on gun violence in America or even just sending sympathy to the family, Trump seemed to be congratulating himself for stances he has taken in the past few days about black America and their support of his candidacy.

After Wade tweeted, his team, the Chicago Bulls also tweeted their condolences. What Wade, and many Americans, are upset about is the fact that random gunfire could happen at any time, hurting anyone. Trump saw it as a way to garner support of African Americans. The candidate has spent much of the week dealing with the ramifications of telling the African community that they should vote for him because they have nothing "to lose."

Trump's perception of African Americans and what they need, or what would move them to vote, is totally out of touch with reality. It's more complicated than blanket statements. Wade summed it up in a later tweet, writing, "the city of Chicago is hurting. We need more help & more hands on deck. Not for me and my family but for the future of our world. The YOUTH!"

Had Trump tweeted about senseless gun violence, the need to reform laws that dictate who can carry firearms, or any of the complex socio-economic factors that keep 14 percent of Chicagoans living in poverty, it would have been a better conversation. He did, a few hours later, tweet like a presidential candidate, "My condolences to Dwyane Wade and his family, on the loss of Nykea Aldridge. They are in my thoughts and prayers." It might be a little too late for Trump.

Instead his initial response highlights two things. The first is that Trump consistently chooses to pat himself on the back for things that aren't worth celebrating. The second is that he is totally out of touch with what many Americans deal with every day. That it was an NBA star's family member to bring attention to gun violence to Trump's attention is telling. This happens all the time. If Trump really wants support from African Americans (or anyone, really), he would do good to try to look at the situation in a critical and empathetic way, instead of using exclamation points to talk about why he deserves a vote.

The presidency isn't about one person, it's about everyone.