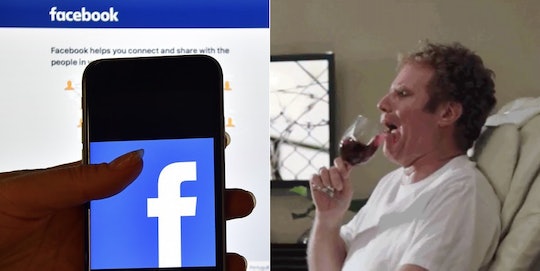 Facebook Is Down, So People Don't Know What To With Themselves (& It's HILARIOUS)

Wednesday was a black, black day for many of us around the world. It was the day when Facebook went down. Well, for some of us anyhow. Not everyone. I know it was down for me and I kept forgetting and heading back in to check my feed... and then my heart would break wide open all over again. It was desperately sad. And I'm not the only one who is feeling blue without Facebook. In fact, these hilarious tweets about Facebook being down prove we just can't function without it anymore, so I guess we're officially part of the matrix. I'm fine with it as long as the matrix is working.

On Wednesday, March 13, Facebook and Instagram users around the world started to notice issues with the two related social media platforms around noon EST, with the Facebook down detector noting around 11,000 new issues at that time and thousands more piling on after. While Instagram appeared to right itself within a few hours, the same could not be said for Facebook.

Apparently it cannot be soon enough for some users. Because #Facebookdown has been trending, and people are flooding Twitter with their sadness.

Facebook, Instagram, and Facebook Messenger have reportedly been having problems throughout the United States as well as Europe, South America, Asia, and Australia, according to USA Today. While the company continues to work to fix the issue (and insists this was not part of some sort of "distributed denial of service attack," according to USA Today, in other words, not a cyber attack), users are trying to come to terms with their new normal.

And that normal looks like racing over to Twitter as fast as their fingers can take them.

Perhaps the most frustrating thing about Facebook being down is that you can still open the app as you normally would, but some of the features simply don't work, according to The Verge. Which feels almost more hurtful because it just looks like it's working for everyone else or maybe you're not as popular as you thought...?

Facebook users suffering from withdrawal couldn't help but wonder on Twitter if they would have had to go through these problems with an old friend from long ago. A little social media platform called MySpace, co-founded by Tom Anderson who sold it for $580 million in 2005, according to Bored Panda.

Some wondered if maybe it was time for Tom Anderson to come back.

Generally speaking I'm a positive person, so I'm going to go ahead and assume that Facebook is coming back any minute. But until it does, I think I'll throw all of my love and energy into Twitter.

Oh, and other people. I'll probably throw love at people too because that's normal. We'll get through this, I promise.