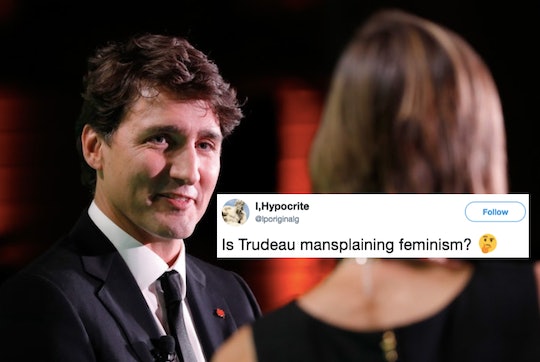 Back in 2015, Prime Minister Justin Trudeau was newly elected to govern Canada. He made headlines for being (let's face it) incredibly adorable, but also for being a proud feminist. People loved it, and loved him for being this modern ideal of an egalitarian, woke politician. But even Trudeau has his off days. And when Trudeau told a woman to say "peoplekind" instead of "mankind," and Twitter rolled its collective eyes like, calm down, Justin. We get it... you're a feminist.

During a recent Town Hall meeting at MacEwan University in Edmonton, Alberta (where Trudeau was greeted with people protesting his approval of the Kinder Morgan pipeline, as CBC News reported), Trudeau was answering questions from the crowd when a woman stepped up to the microphone. The young woman spoke out about the apparent difficulty to offer religious volunteer services in Canada, and asked him to consider looking into policy regarding religious charitable organizations. Because, as she noted, "maternal love is the love that is going to change the future of mankind."

At which point Trudeau interrupted the woman and appeared to do a little mansplaining about the word mankind. "We like to say peoplekind, not necessarily mankind. It's more inclusive."

And just like that, while the audience erupted in applause, a collective groan could be heard throughout the internet. Romper's request for comment was not immediately returned.

Naturally, critics of Trudeau's response, which many people considered over-the-top even for the famously politically correct prime minister, took to Twitter to mock him relentlessly.

Some even noted that there is simply no such word as "peoplekind."

It's true that the Canadian prime minister has made a name for himself for being focused on gender-equality. When he was initially elected back in 2015, Trudeau ensured that his chosen cabinet was made up of equal parts men and women. When questioned about that decision, his simple explanation was that he actively chose to have a gender diverse Cabinet because, "it's 2015."

As much praise as Trudeau has received on the international level for being a feminist, he's been criticized by right-leaning politicians and media for going too far on more than one occasion. This latest insistence on saying "peoplekind" seemingly one of those times when Trudeau went too far.

Or so that cleverly edited clip might have you believe.

On the surface, the short clip appears to show Trudeau correcting a woman for saying "mankind." But, as Vice noted in a recent article, the full clip shows a far different exchange than the brief soundbite previously shown. The woman's question is significantly more religion-based than it first seemed, for one thing, congratulating Trudeau for his gender equal Cabinet choice before moving on to a more specific agenda:

We believe you have done this because you recognize the ability and power that women actually possess… Women have this power… because they hold something called ‘maternal love.’ And maternal love, scientifically known as ‘mitochondria’ or ‘oxytocin’ is the necessity that sustains life in our global village. This is a kind of love that puts others ahead of themselves, like a mother cares for her children. If the economy fills with women, it will develop beautifully, and this is honestly what the country needs.

When Trudeau says that it's "peoplekind, not mankind," after three minutes of allowing the woman to speak without seeming interested in asking a question, the audience laughs and applauds. Even the woman in question smiles and says, "Exactly, thank you!"

It's easy enough to pass judgment on a one-minute long edited video. To assume that the prime minister is being overly sensitive, more concerned with promoting his own hyper-feminism than paying attention to the needs of his constituents. Especially when it's kind of funny.

But honestly? I don't think that's what happened here. I think Trudeau was cornered by someone with an agenda, and ended the exchange as gracefully as he could.

More Like This
Obamas Issue Powerful Statements After Supreme Court Ends Roe v. Wade
Viral TikTok Breaks Down How Beautifully Bluey Depicts One Character’s Infertility
This Reddit Post About Two Sisters In A Fight Over Breast Milk Is Complicated & So Sad
Reddit Is Not Impressed With Dad Who Hid Neighbor's Gnome Because It Scared His Kid