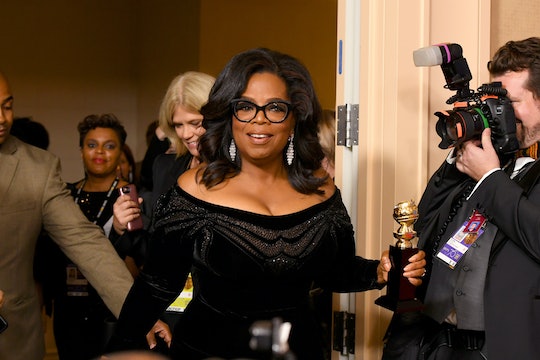 I don't think I have to wax poetic here about how amazing of person Oprah Winfrey truly is. It's just a fact of life, right? What's also clearly evident is the notion that Oprah would make a really great president in theory. Although Oprah's possible 2020 run was first conceptualized after President Donald Trump took office, the rumor has become a topic of conversation once again thanks to her speech at the Golden Globes on Sunday night and a hilarious joke from Seth Meyers. And it goes without saying that the Twitter reactions to Oprah running for president will reinforce your belief in her ability to lead America. Heck, even Canada is on board.

All the talk about Oprah running for president started after she accepted the Cecil B. DeMille Award, a prestigious honor given to someone who has made “an incredible impact on the world of entertainment," according to Variety. Oprah, because she nails everything, moved the audience with her acceptance speech about race and influencing young girls around the globe. And some might argue that she even hinted at running for office down the road when she declared to viewers: “I want all the girls watching here, now, to know that a new day is on the horizon!," according to CNN.

Unfortunately for all of you #Oprah2020 hopefuls out there, Oprah said backstage at the event that she has no plans to run for president, according to Vox.

Although this might be disappointing to many, it still hasn't quieted the growing calls for Oprah to start her presidential bid. Many people are just downright thrilled at the prospect of having Oprah sitting in the Oval Office, to say the least.

Of course, it's important to note that there are also many people who aren't so psyched about the prospect of having another person from the entertainment industry take office. While the image of Oprah taking meetings in the White House makes me happy, it's a fleeting feeling. Because the truth is, Oprah isn't qualified enough to actually be president (just like President Trump wasn't and isn't). Not only has she never held a public office before, but she doesn't have an ounce of experience in foreign or domestic policy. When you consider that people work their entire lives to get elected (especially people of color), the call for Oprah's presidency seems a bit hollow.

Writer Mikki Kendall summed up the #Oprah2020 phenomenon as the "cult of personality approach to politics," which seems pretty apt when you consider people are also championing Dwayne "The Rock" Johnson to run for president.

Senior legal analyst and writer Imani Gandy also pointed out that it's "insulting" to assume that women of color need Oprah's influence to secure a presidential nomination:

And although it's obvious, it's worth repeating that Oprah isn't the only woman in the world. 2018 is already chock full of amazing female candidates and people should probably be focusing their attention on their campaigns instead of championing Oprah's.

Plus, Oprah's win might pave the way for Kanye West, and that just might be too much.

Other people just wish Americans would learn their lesson:

So, I think the takeaway here is that #Oprah2020 is a complex topic. On one hand, Oprah is a truly fabulous person who has done a lot for the world. I mean, I could write an entire essay on just one of Winfrey's amazing causes and charities, for example. Plus, Oprah is eloquent, thoughtful, and just downright inspirational. That being said, there are so many other qualified people out there who could run for office, and it's worth considering that a lot of these candidates are in need of support.