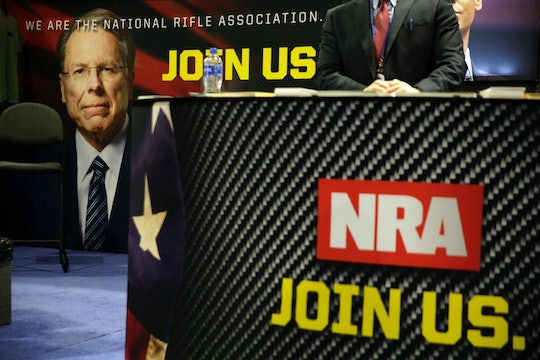 The National Rifle Association (NRA) is reportedly putting an end to its problematic online news network, NRATV. On Wednesday, The New York Times reported that the NRA would be parting ways with its advertising firm, Ackerman McQueen, which runs NRATV, making the controversial network no more. And seeing how Twitter is reacting to NRATV reportedly shut down shows people are pleased with the development and feel it was long overdue.

The New York Times reported that the network would be shutting down after the NRA's executive, Wayne Lapierre, stated that NRA members thought the network was "too far removed" from their core mission of defending the second amendment. Visiting nratv.com now directs you to the NRA's website and, as such, new content will no longer be produced. The network's on-air personalities, like gun rights talking head Dana Loesch, will also reportedly no longer be a "public face of the NRA", according to The New York Times.

The NRA has not yet responded to Romper's request for comment regarding reports of the network shutting down, but a representative from Ackerman McQueen tells Romper in statement that it was time to "move on to a new chapter."

People on Twitter, though, had a more celebratory response to the news, taking this move as a win and offering their own "thoughts and prayers" that's often been the go-to response from the reported former network and its supporters

"Ackerman McQueen is not surprised that the NRA is unwilling to honor its agreement to end our contract and our long-standing relationship in an orderly and amicable manner, as Ackerman McQueen proposed, because we believed it was in the best interest of the members of the NRA," a spokesperson for Ackerman McQueen went on to tell Romper in a statement.

Since 2016, NRATV has been a conservative online outlet, or as John Oliver puts it "FOX News on a lower budget" for the NRA to air conservative leaning news shows to those willing to tune in. The network not only aired news programs, but had 34 taped shows including talk shows and programs about how to properly handle guns, according to Media Matters. The network was often controversial, if only for their blunt comments about critics of the Trump administration, as Media Matters explains. In fact, the goal of NRATV appeared to "encourage a sense of shared identity around gun ownership", according to TIME.

At this point, however, it's unclear what the future of the NRA and their attempts to reach others will look like now that NRATV will reportedly no longer exist.

NRATV had long created problematic content, so much so that companies decided to stop working with the network well before their reported demise, as the New Yorker has previously reported.