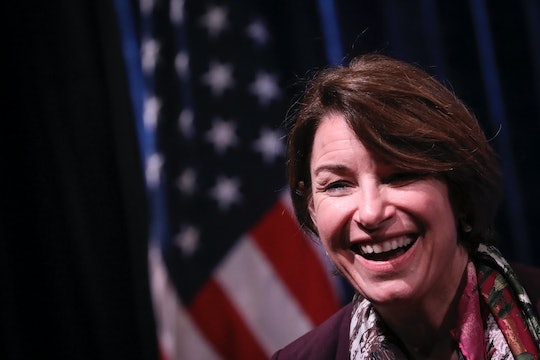 In an effort to highlight issues central to her campaign, Democratic presidential candidate Sen. Amy Klobuchar's 2020 debate guests will be two moms whose stories have helped drive bills centered on combating the opioid epidemic and the skyrocketing cost of prescription drugs like insulin. Nicole Smith-Holt and Shelly Elkington will travel to Miami, Florida as Klobuchar's guests to attend the first debate of the 2020 Democratic presidential primary.

"I think the senator really just is behind the issue with Big Pharma and really can appreciate the work that Nicole and I are both doing as … two grieving moms who are just not going to take it anymore," Elkington recently told The St. Paul Pioneer Press about being the Minnesota senator's debate guests. "We've just fought so hard to … put into perspective for people that these are families, these are lives that are impacted by this Goliath industry."

Both women have lost children as a result of either the opioid epidemic or unaffordable prescription drugs. They've since turned their grief into advocacy, pushing for bills like the Curbing Unreasonable Rises and Excessively (CURE) High Drug Prices Act, which Klobuchar and fellow 2020 Democratic presidential hopeful Sen. Kamala Harris introduced in December; or Klobuchar's package of three bipartisan bills aimed at combating the opioid epidemic, which were signed into law in October.

Smith-Holt lost her 26-year-old son Alec in 2017 after he fell into a diabetic coma as a result of trying to ration his insulin when his insurance ran out. Smith-Holt told CBS News her son was a Type 1 diabetic and thus needed insulin every day. He'd previously been covered by his parents' insurance, but at age 26, was no longer eligible for that coverage. Smith-Holt told the news outlet that without his insurance Alec had found the cost of his insulin and its related supplies would run him upwards of $1,300 a month — a cost he couldn't afford.

"My son died because he could not afford his insulin," she told CBS News.

Earlier this week, Smith-Holt told The St. Paul Pioneer Press she viewed Klobuchar's invitation to the first Democratic debate as evidence the senator took the issue of insulin access seriously. "The invite means to me that she is still a supporter of our fight for insulin for all," Smith-Holt said, as the paper reported. "This is a real issue that she takes seriously, and she really wants to be a part of legislation that makes changes for prescription drug pricing."

Elkington, the other mother set to be one of Klobuchar's debate guests, lost her 26-year-old daughter Casey Jo Schulte in 2015 following a years-long battle with opioid addiction. According to an official on Klobuchar's 2020 campaign, Schulte's battle with opioid addition began roughly seven years before her death when she was diagnosed with Crohn's disease and over-prescribed pain medication. Elkington has been working with Klobuchar on ways of combating the opioid crisis since shortly after her daughter's death, according to a 2018 report in The West Central Tribune.

In fact, both Elkington and Smith-Holt have been Klobuchar's guests at high-profile political events before. Elkington was the Minnesota senator's State of the Union guest in 2018, while Smith-Holt attended this year's address per Klobuchar's invite. They'll attend the first Democratic presidential debate with Fran Parr, an Iowa woman whose home was flooded in April. An official with Klobuchar's 2020 campaign tells Romper the women's stories highlight issues — lowering prescription drug costs, the opioid epidemic, and climate change — that Klobuchar has marked as her top policy priorities.