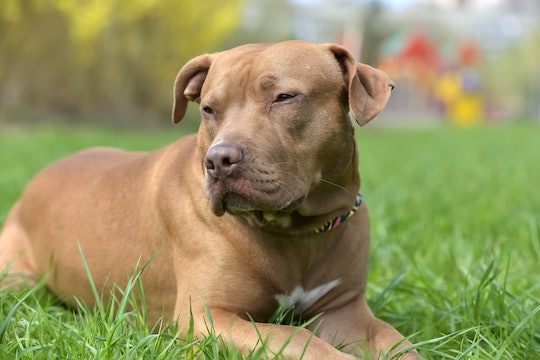 Two Pit Bulls Fatally Mauled A Child, & It's A Terrifying Reminder To Parents

On Saturday, a family in Lowell, Massachusetts experienced the tragic loss of their 7-year-old son, when the boy was fatally mauled by two pit bulls near his home. The boy — whose name has not been released by the Middlesex County District Attorney's office — entered a fenced area, where he was then attacked by the two dogs. Authorities have not said whether the dogs were owned as pets, nor have they identified any potential owners of the two pit bull dogs.

Neighbors said the boy was playing with his older brother at around 6 p.m. Saturday evening, according to FOX 25. It's unclear whether the boy was trying to pet the dogs through the fence or jumped into the enclosed area where the dogs were to pet them; authorities also aren't sure if the boy may have been pulled through the fence by one of the dogs. Regardless of the specifics, the outcome was horrifying: Multiple calls were made to 911, but by the time police arrived, the boy was already dead.

One of the dogs escaped following the attack, but police were able to find the pit bull and euthanize it — but not without a fight. According to a recording of one of the 911 calls, a responding officer shot at the dog: "The dog is hit, it’s still coming at me." The second dog involved in the incident was captured by local animal control and remains in their custody. As of Sunday, the Middlesex District Attorney has not filed charges.

As the family and community reels from such a violent, senseless death of a young child, it highlights the ongoing misinformation about the dangerousness of pit bulls, especially around children. In 2016, a survey of dog owners was conducted by Dognition, a company that specializes in science-based play to evaluate a dog's "cognitive abilities and natural tendencies." In the survey, Dognition found that out of more than 4,000 dog owners and across 35 different breeds, Chihuahuas were more aggressive than pit bulls.

But according to DogsBite.org, a national non-profit and dog bite victims' group, pit bulls account for the largest amount of dog bites by breed in at least 29 states — Massachusetts included, where the 7-year-old boy was mauled to death over the weekend. In addition to leading dog bite counts, DogsBite.org notes that, "The pit bull bite is also the most damaging, often inflicting permanent and disfiguring injuries," as the result their power (pit bulls do not have locking jaws, contrary to a popular myth). The pit bull is not the problem — dog owners are responsible for changing or reinforcing behavior.

But there's a much bigger takeaway message here for parents than just one specific breed of dog. The American Society for the Prevention of Cruelty to Animals offers a lengthy position statement on pit bulls that's worth the full read. The ASPCA notes that the pit bulls of today are indeed vastly different than their 19th Century ancestors, but reiterate that every dog is its own individual, and an entire breed shouldn't be judged by the behavior of some aggressive pit bulls.

It is likely that that the vast majority of pit bull type dogs in our communities today are the result of random breeding — two dogs being mated without regard to the behavioral traits being passed on to their offspring. The result of random breeding is a population of dogs with a wide range of behavioral predispositions. For this reason it is important to evaluate and treat each dog, no matter its breed, as an individual.

And that's where the crucial lesson for parents lies: The American Academy of Pediatrics stresses that regardless of breed, children should be taught several fundamental rules for being around dogs, including: Never chase or yell at a dog, ask permission before touching someone else's dog, and do not bother dogs while they're eating or sleeping. Likewise, parents should never leave a child alone with a dog, "even a dog well-known to your family," AAP spokesperson Dr. Alison Tothy said in a statement on the AAP website.

Ultimately, Saturday's tragic and violent death of a 7-year-old boy from a dog mauling could have been caused by just about any breed of dog, pit bull or otherwise. How a dog is raised, socialized, and treated by humans is just as much a factor of how a dog behaves around humans as its breed. And even then, even the most loving, non-aggressive dog can harm a child accidentally — so it's the shared responsibility of both pet owners and parents to do right by their dogs and kids, respectively, to help keep our children safe around our canine companions.