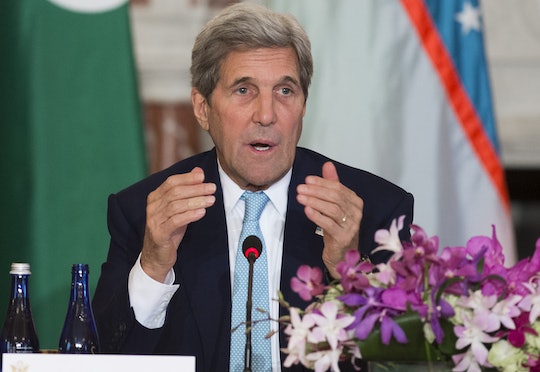 Back in January, almost simultaneously, four American prisoners were released and the United States sent $400 million to Iran. There's a lot to think about when it comes to the cash delivery, the release of the prisoners, and the information is coming from all sides. No one seems to be on the same page.

Here's the thing: the American government sent straight up cash, hard money, to Iran. According to CNN, that's because Iran can't receive funds directly from the United States, and they have little access to the world banking system. So a carrier plane secretly delivered actual wooden pallets — like ones you see in the supermarket if you get there early enough and they are still stocking shelves — of Europeans coins and Euro to pay a debt America already owed to Iran.

In the same timeframe as the delivery of the $400 million, four American detainees were released from Iran. You might remember their names from when they were making headlines. They were Washington Post Tehran correspondent Jason Rezaian, former U.S. Marine Amir Hekmati, Christian pastor Saeed Abedini, and Nosratollah Khosrawi-Roodsari. According to the Huffington Post, they were being held on "trumped up" charges and in some cases, no charges at all. All four were released straightaway and into the Americans' hands. Now, critics of the Obama administration are charging that the money that had changed hands between U.S. officials and the Iranians was something of a ransom payment. President Obama, in these critics' eyes, had grown weak and given into Iran's demands for cash. The president's supporters strongly disagree.

This is all starting to sound very complicated, right? Let's break it down in terms that are easier to digest.

Why Did The United States Owe Iran Money?

This is one of those stories where if you haven't read the first five books of the series, it makes next to no sense. I've read most of the books and even I get loopy when it comes to the plot points. Here's the simplest breakdown: Once upon a time in 1979, U.S. and Iranian diplomatic ties broke down when America sided with the Shah Pahlavi (or the monarchy in Iran), after Ayatollah Khomeini, who was very anti-Western, staged a coup. The United States had an arms deal with Iran at the time and after the hostage crisis of 1979, America backed away from it, but not after taking Iran's money for arms.

In 1981, at The Hague, a neutral place, it was decided that America would pay Iran back. Flash forward to 2016, when Secretary of State John Kerry and diplomats finally penned a nuclear arms deal. Part of those negotiations, on the side, was the understanding that Iran wanted the United States to pay back the $400 million trust fund they had given America for services not rendered way back when. Iran tacked on another $1.3 million in interest. According to the Obama administration in January of this year, that was a bargain compared to what Iran was initially asking for. So the $400 million in January was the first installment. We still owe Iran cash money and any president in 2017 is going to have to deal with it. It's not going to just stop being an issue.

When I first heard of the cash pallets, I burst out laughing. They can't take a traveller's check or a Western Union transfer? "Pallets of money" sounds like something out of a bad Matt Damon movie. And it actually is, which is the complicated thing. This is the kind of move movies are made of, and one day, take my bet now, an aging George Clooney will produce a biopic about the 2016 Iranian debt repayment/nuclear arms deal, and Zac Efron will play John Kerry.

But seriously, the cash itself isn't nefarious. Because of the 1979 revolution in Iran and their deteriorating standing in the global economy since then, Iran has pretty much been cut off from the global banking system. Also, because of sanctions that prohibit the United States from just giving or lending Iran money, the Obama administration had to get creative on how to settle the debt.

According to CNN, the money was taken from "central banks in Switzerland and the Netherlands," and paid in in Swiss francs, euros, and "other currencies" on an unmarked cargo plane. It sounds shady AF, but it was also, seemingly, the most expedient way to get started. There is no way, since cash is the king of shady, to know where the money went to after it landed. But among the informed and in-the-know, the repayment and deal with Iran is in America's best interest. Cross your collective fingers, America.

America had four detainees in Iran at the time of the initial repayment. On the very same day we delivered the shady cash, the hostages were freed. According to the Obama administration, it was about timing. Obama said, according to CBS News, "With the nuclear deal done, prisoners released, the time was right to resolve this [financial] dispute as well." It wasn't a ransom in the most technical sense, because America already owed Iran money and had been bickering about it for decades. But if you have blinders on to history, it could look like that.

Try to put your political leanings aside and see it like this: You allegedly owe your sibling $17 (CD prices!) because you grabbed their MTV Party To Go 1995 CD back in the day and lost it at a party. You've bickered over dinner tables about it for years, it's a long running family joke, because it's not clear whether you really owe the cash or not, because they weren't even a Brandy fan in the first place.

Neither side ever backs down over turkey and mashed potatoes.

Decades later, they take your dog, left at your parents' house, while you study abroad and then claim the dog is theirs, because you were traveling and ignored it (hostages are not dogs, but let's run with this) and they are still angry about that one CD you lost, that you were supposed to share. In return for the safe transfer of the dog to your home and for the greater good of family dinner table discussions, you agree to finally settle this one outstanding debt you don't really think you owe. You give them $50 bucks, accounting for inflation, mumbling under your breath about how they never liked Jodeci anyway, and take the dog home.

Let's just work this out, one might say in that situation. Enough is enough. That, for sure, is totally oversimplified, but the $400 million installment paid in January, whether you love the Obama administration or not, was sort of like that.

It was not quid-pro-quo. It was, "Sign this nuclear deal, give us our four people, and we'll make good on that debt we have that we've been fighting about for years." The $400 million, and the promise of the rest, was caught up in something more complicated than any headline can convey. There were, are, lots of things happening at once.

Which is why any voter who is troubled by this exchange should read up. It means digging into policy and history. Here's a starter guide.

It cannot be summed up into one tweet by any candidate. Diplomacy among countries is much like dealing with family — there are good times, bad times, ifs, buts, ands, and that one time an aunt walked out of Thanksgiving dinner because the father-in-law gave her a dirty look.

There are levels to this. It's complicated. Which is why it was done in secret, probably, because government officials and diplomats are not good at explaining to the masses what's happening. Because the masses, if we just judge by social media, have no idea of the history and intricacies leading up to complicated exchanges like this one.

It's like tuning into Game of Thrones starting from Season 3. There's a lot of backstory and one cannot keep up without knowing what happened before. That's why Americans need a president who has read the books and then watched the entire series, and is able to call the shots. This $400 million is not a scandal. It's history.