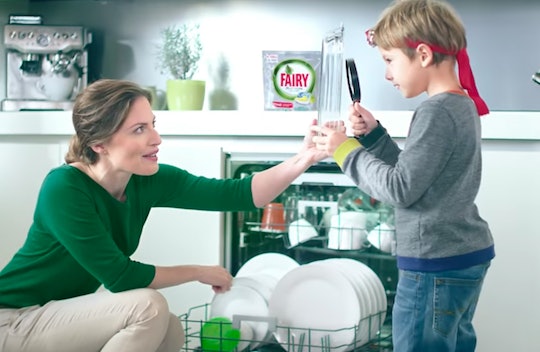 The U.K. Just Took A Huge Step In The Fight Against Gender Stereotypes

It might be 2019, but gender stereotypes are still alive and well. All you need to do is watch a bit of daytime television and you'll be inundated with ads for cleaning supplies, vacuum cleaners, and more, all starring women who apparently are the only ones who take care of household chores. But the stereotypes don't stop there, and the United Kingdom has had enough of it. Using gender stereotypes in advertising has been banned in the UK and the US should take note.

The Advertising Standard Authority, a U.K. group that sets British advertising codes, said in a statement that, "harmful stereotypes can restrict the choices, aspirations and opportunities of children, young people and adults and these stereotypes can be reinforced by some advertising, which plays a part in unequal gender outcomes."

It makes a whole lot of sense, but will advertisers be able to comply?

The ACA gives the following examples of ads that they may deem as problematic:

The sweeping change was in response to recent British ads that relied heavily on gender stereotypes to sell products, like some that depicted girls as ballerinas and boys as scientists, according to ABC News.

But this doesn't mean all gender stereotypes will magically vanish from U.K. screens. The ACA will only axe those ads that they deem "harmful," and it will occur on a case-by-case basis, according to ScaryMommy.

The above ad from The Asda supermarket chain is just one example of a "harmful," ad.

“While advertising is only one of the many factors that contribute to unequal gender outcomes, tougher advertising standards can play an important role in tackling inequalities and improving outcomes for individuals, the economy and society as a whole,” Guy Parker, Chief Executive of the Advertising Standards Authority, said in a statement to the New York Times.

So, where does that leave the U.S.? There are tons of ads out there that depict women and men in completely outdated roles. Most people have seen them — the sleep deprived and disheveled new mom, the woman who can't seem to park her car, and the man who's belittled for doing "womanly," chores.

There is no law against such ads here in the United States, but maybe there should be. The world is changing and advertisers should take note. Believe it or not, men can handle the house when mom is out of town, some women don't like to cook and clean, and girls do want to be engineers. Times have changed — for the better and it is time advertisers played catch up.

More Like This
WowWee’s New Fairy Finders Will Keep Kids Distracted For Hours
The Covid Vaccine For Kids Under 5 Has Been Sent To The FDA For Review
Prince George Hosted A “Little Cake Sale” For One Of His Dad's Favorite Charities
Lyle, Lyle, Crocodile Is Heading To The Big Screen As A Musical Comedy